Cyndi Lauper – My First Night Without You 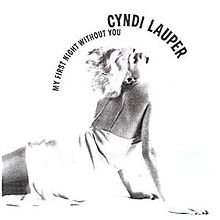 …in which Cyndi Lauper channels Ben E. King and demonstrates what it would be like to have someone go through a complete emotional breakdown right in front of you, all in the space of three minutes.

Yes, My First Night Without You doesn’t half put you through the ringer. It is not, by any stretch, a happy song – but far more miserable songs have topped the charts (paging Sinead O’Connor) – so that is by no means a bad thing. I like to think of this as a kind of direct sequel to previous single I Drove All Night, where it turns out that creeping into someone’s room in the wee small hours to make love to them isn’t such a good idea for relationship longevity.

It’s interesting to remember that Cyndi Lauper and Madonna both hit the charts at a similar time, and in those early days the smart money was certainly on Cyndi – and it was she who took home the Best New Artist award at the Grammys in 1985; Madonna would have to wait until 1992 to bag her first. But somehow by 1989 Cyndi seemed like a relic from a bygone age, never quite having lost the “kooky” tag. So while she developed as a songwriter and continued to be amazing, the hits grew harder to come by, and Epic Records decided to spend the majority of their marketing budget on Gloria Estefan instead.

Cyndi would go on to have sporadic chart success over the next few years, hitting an artistic peak with 1993’s beautiful Hat Full of Stars. She did it again in 2004 with Shine, but by then only Sony Music Japan were bothered enough to actually release it, despite it being a bloody triumph and functioning as a more mature companion piece to 1983’s She’s So Unusual. Here’s the title track, should you doubt me:

Cyndi Lauper, having had a shoe fixation since the back cover of her first solo album, now writes musicals about shoes (Broadway smash Kinky Boots) and very nicely she is doing too. Hurrah!

Who could sing this today and have a hit? Oh go on then, Paloma Faith.