Orchestral Manoeuvres in the Dark – If You Leave 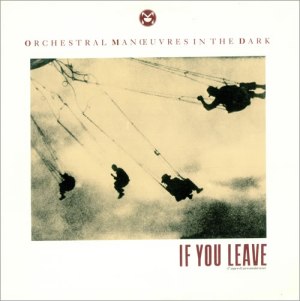 This song takes me back to the time I wanted to go to the high school prom but I didn’t think I was good enough compared to all the rich kids. My dad bought this really lame dress in a thrift store and I pouted a lot, but eventually I learned a valuable lesson about inner beauty and the dress ended up being ok after a cool montage and everything turned out great.

Oh wait, false memory syndrome – that was Molly Ringwald in Pretty in Pink. I get confused because this song plays over the end of the movie and it’s been a part of my life for so long that it feels like it belongs exclusively to me.

Maybe it’s the way it was used in the film and my age at the time (fourteen) but I don’t think there’s ever been a song that better encapsulates intense teenage yearnings – not especially in the lyrics, but in the fizzing, building nature of the production. It’s like a huge fireworks display going off in your head, and by the time the big key change arrives you just want to run over and kiss the nearest reasonably attractive person.

A few years later I made a music tape for the prom we actually threw at our school in Scotland – rather ahead of our time there – and while I certainly taxed a lot of the attendees’ patience with the full 12 inch version of Mantra for a State of Mind by S’Express, the inclusion of If You Leave rescued matters and I’m pretty sure a lot of people copped off, although none of them with me.

Quite how it missed the top 40 is absolutely beyond me. A swift look at the week where it entered the chart reveals Madonna singing about domestic abuse with Live to Tell, George Michael being miserable and alone with A Different Corner and the Grange Hill Cast successfully ending the nation’s drug problem forever with Just Say No. Perhaps If You Leave just sounded too upbeat.

Who could sing this today and have a hit? I’m envisaging a 30th anniversary tribute album next year and Charli XCX gets to do it.