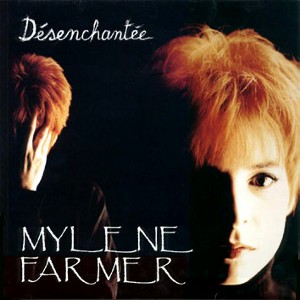 We return now to the realm of French pop and its undisputed queen, Mylene Farmer. Were you inclined to put Madonna and Pet Shop Boys into a blender and blitz on full power for a couple of minutes – in France – she might well be the result.

Let’s talk for a second about what I like to call the Total Pop Eclipse – the moment when everything aligns at exactly the right time to blot out all other stars but one. It marks the ascendance of an artist to the imperial phase of their career; for Madonna it was Papa Don’t Preach. For Pet Shop Boys it was It’s a Sin and for Cheryl Cole it was – oh, we’re still waiting on that one. Very few of us in the UK were aware of it at the time, but in 1991 Mylene had hers with Désenchantée:

Désenchantée, as you may have noticed, is not short on drama and came with one of those absurdly long and expensive Message Videos where there’s so much noise overdubbed that you can barely hear the song (see also: The Jacksons and Can You Feel It?) It’s kind of a totalitarian Les Miserables-meets-Oliver Twist affair and is sadly lacking in amazing dance routines, but then you can’t have everything.

The song though, is literally one of the best pop productions ever – it’s up there with Grace Jones‘s Slave to the Rhythm in being absolutely perfect from start to finish. Opening with all the foreboding of a storm blowing in, it explodes into a relentless 126bpm, managing to convey disenchantment and revolution to those without even a word of French. Grounded throughout by a terrifically sinister piano, it’s one of the most exciting five minutes of music ever made.

Naturally this wasn’t even released in the UK – despite earlier successful forays by Vanessa Paradis and Desireless, nobody at Polydor seemed to think it was worth doing. Or perhaps Mylene just wasn’t fussed. Who knows? All I know is I would have loved to hear this woman do a Bond theme.

Who could sing this today and have a hit? I really, really want Ruth Lorenzo to do a Spanish version of this. She can do drama, that girl.