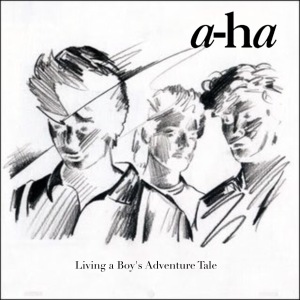 Choosing singles can be a hard job – get it right and you have massive hits on your hands, a successful album and if you’re lucky, a range of dolls – get it wrong and you have – well, MDNA, basically. Only a fool would argue that a-ha chose the wrong singles from Hunting High and Low, but there was room for another and it ought to have been Living a Boy’s Adventure Tale.

Spooktastic, no? Of all a-ha recordings, this displays Morten Harket at his most Morten-ish. Just wait until 3:52 when he does the thing that only he can do. From that point on he’s up in the stratosphere, fluttering around the melody like a magnificent white-throated dipper (the national bird of Norway, fact fans.) It’s absolutely breathtaking. There’s also something lovely about lyrics from people whose first language isn’t English, because you end up with perfectly correct but wonderfully antiquated phrases like “I’ve fixed my dwelling for the night,” which sounds so much better than “Here I am in a shed.”

Perhaps Living a Boy’s Adventure Tale appealed to me so much in 1985 because I was a boy distinctly lacking in adventure, perhaps it’s because my girlfriend of the time (for about five minutes one lunchtime anyway) bore a distinct resemblance to Morten, even down to the leather wrist-strap. I wasn’t alone though – you only have to witness the reaction to it at an a-ha concert to realise just how loved this song is. It’s what we call a Fan Favourite, and you can always tell when one is being performed because you see tearful mesmerised people mouthing along to the words, rapt with joy. Me, essentially.

Fairly uniquely among their contemporaries, a-ha continued to be amazing right into the twenty-first century, only calling it a day for the last time in August 2011, making a big hoo-ha about their final farewell.

So naturally they are performing at Rock in Rio later this year. I don’t begrudge them.

Who could sing this today and have a hit? Possibly the only person that could have a bash at this is Sia.