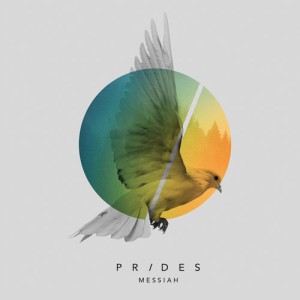 As a card-carrying Scottish person (the card donates my organs to Greggs the Bakers) I’m ashamed to admit that I hadn’t actually heard of Prides until they popped up at the closing ceremony of the Commonwealth Games in Glasgow last year. They were so breathtakingly good that I temporarily stopped shouting “WHERE ARE THE PROCLAIMERS?” at my television.

How could so exciting a band have escaped my attention? Was I getting old and out of touch? Clearly I was. But I made it my business to find out everything I could about them, and immediately started pretending I’d been a fan since the very beginning. “Oh yes Prides,” I’d nod, knowingly. “Love their early stuff.”

Unfortunately Messiah is their early stuff, so I looked like a right idiot. But never mind – let’s have a watch of the video, which will send pangs of longing through anyone who’s ever lived in Glasgow.

This falls into a category I like to call Apocalypse Pop – the kind of music that would sound equally at home in a large stadium or a cavernous cathedral. It’s synth-tastic, spiky and with a totally convincing, almost sermon-like vocal from Stewart Brock. It’s odd for a nation not prone to public displays of intense internal yearnings that Scotland throws up so many singers who can emote like their lives depended on it – Ricky Ross, Eddi Reader, Pat Kane, Justin Currie, Emeli Sandé, Jimmy Somerville, Midge Ure,  and – of course – Billy Mackenzie, to name just a few. We can definitely add Stewart to that list.

Excitingly, Prides are just getting going – new single Higher Love is equally brilliant, and has far and away the best middle eight of 2015 so far – as well as a fabulously Scottish, self-deprecating video. I have high hopes for these boys.

Who could sing this today and have a hit? It was practically yesterday in modern pop terms, so Prides themselves could still have a hit with it.