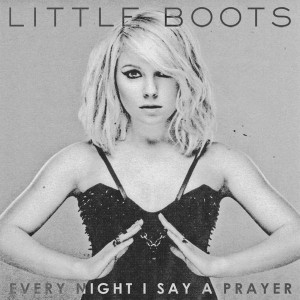 We’ve talked a little before about stealth marketing, and here’s another time where there’s a whole lot of stealth but very little marketing. I’m referring in this case to the concept of the free download, a generous enough gesture on the part of the artist/record company, but one which renders a track completely chart ineligible. I’m never entirely sure what the point of it is. I can’t speak for all pop fans, but here is how my mind tends to work when I see that someone is giving away their new song for precisely nought pence:

And that is as far as I generally go, because free stuff in pop generally is a bit rubbish. We’ve all had our fingers burned by the iTunes 12 Days of Christmas thingy, and all you end up with is a really terrible remix of a Cheryl Cole song or a live Duran Duran track – live, I ask you.

Of course if anyone was going to buck the trend of the naff free download it was the brilliant and contrary Little Boots. Every Night I Say a Prayer appeared in the spring of 2012 at a point when that BBC Sound of 2009 poll win seemed a very, very long time ago.

A strange thing has happened in recent years, where we seem to have returned to the kind of release cycle last seen in the sixties – an album a year is the expected norm, and a constant stream of singles to keep you in the public eye. Some make their mark and some don’t, but it doesn’t matter because another one will be along in a minute. Thirty years later a three or four year gap between albums was absolutely normal, and created a sense of anticipation and the opportunity to return as something of an Event. Try that now and you’re on a hiding to nothing – as La Roux recently found out, attention spans have contracted sharply. I’m not even certain Adele will find it as easy you might expect.

What this all means is that seriously amazing pop stars are cast adrift with alarming regularity. Every Night I Say a Prayer – a collaboration with Andy Butler of Hercules and Love Affair – is a genius piece of pop, coming across like Black Box on a really bad comedown, with the cowbell that used to signal the end of every PWL 12″ mix being used to great effect throughout. The word hypnotic gets used a bit too much when describing pop songs but in this case it’s actually rather true – and had this been played on the radio and given a bit of a push an awful lot of us would have been hypnotised into buying it.

Still, pop stars will be pop stars and they can do what they want – but I would have loved to pay 99 pence for this.

Entered chart: was not eligible

Who could sing this today and have a hit? When Rachel Stevens emerges from the wreckage of the S Club 7 reunion she should relaunch her solo career with a Richard X produced version.