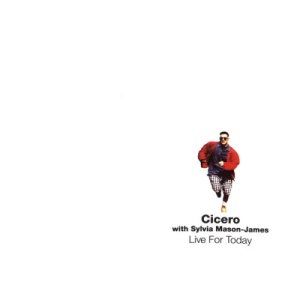 In America there is something called the Mason-Dixon line, which essentially marks the cultural border between the North and the South. In Britain – in pop terms – we have the Mason-James line, which marks the cultural border between Good Songs by Bad Pop Stars and Just Plain Bad Ones. It’s a simple rule, one which states that if Sylvia Mason-James features on your record then it stands a better chance of being good. Exhibit A in this case is always Ain’t No Doubt by rubbish pop star Jimmy Nail. She totally transforms that song into something approaching brilliance (“I don’t want nobody else…I love you.”)

Here’s Exhibit B: Live For Today, versions of which appeared on the soundtrack to The Crying Game.

Cicero was a dour Scottish teenager signed to Pet Shop Boys‘ short-lived vanity label Spaghetti Records, and unfortunately he made for a completely rubbish pop star, despite being good-looking and having exactly the right haircut for the times. He managed a sole top 40 hit, 1992’s not very exceptional Love is Everywhere, complete with obligatory Neil Tennant backing vocals. Possibly emboldened by Rod Stewart‘s 1991 hit Rhythm of My Heart, it featured bagpipes even more prominently than Mull of Kintyre and is possibly the most Scottish thing ever recorded. It definitely possesses the most charisma-free spoken word verses I’ve ever heard – I shudder to think how many takes they did before deciding “Oh god, that’ll do.”

But then – astonishingly – he made a brilliant record, and one which shows that sometimes things do add up to more than the sum of their parts, especially when you throw Sylvia Mason-James into the mix. Produced by Pet Shop Boys, it’s an uplifting synth spectacular, with plenty of those oh-so-early-90s plinkety-plonkety sounds that work really well in a club when the strobe lights come on and you can do complex boxy hand movements. But what makes it entirely is Sylvia’s contribution – she belts her lines out like this is the most important thing she will ever do, transforming simple ad-libs like “No no no no no no” and “I never…I never planned it that way baby” into a goosebump and tear-inducing one woman symphony. Twenty feet from stardom indeed.

Of course there is something of a curse laid upon people who collaborate with Pet Shop Boys, though I’ve never entirely been able to figure out why. They came perilously close to wrecking Girls Aloud‘s top ten streak when one of their best songs, The Loving Kind, scraped to no.10, and their hook-up with Robbie Williams, She’s Madonna, only made no.16. Live For Today never really stood a chance did it?