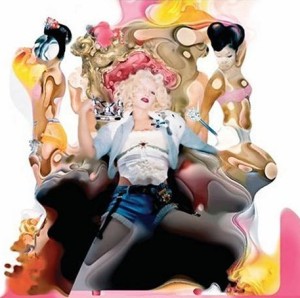 “Supergroup” is a term that rightfully sends a shudder through the body of even the most optimistic pop fan. You’d think that putting a bunch of hugely talented people together would yield only amazing results, but for every Electronic there’s always a SuperHeavy or a Traveling Wilburys. When you have personalities that aren’t used to being told no – as we discussed re: Janet Jackson not so long ago – the results can end up being, well, super heavy.

What’s needed in these situations is a ringmaster, unafraid to crack the whip and say “NOT A CHANCE LOVE” when Madonna suggests rhyming “waiting” with “anticipating” again – and it turns out that Gwen Stefani is the queen of this particular circus.

With No Doubt on hiatus, in 2003 Gwen began putting together the elements of what would become her debut solo album, Love Angel Music Baby. When it eventually emerged in November 2004 it exploded my long-held suspicion that a record with a multitude of producers couldn’t be a coherent piece of work. Despite featuring no less than ten knob-swizzlers, L.A.M.B didn’t just hang together, it was a triumph; or, as I excitedly pronounce about an album at least once every ten years: “it’s this decade’s True Blue!”

Central to the whole thing is of course Gwen herself, who genre-hops like it’s the easiest thing in the world. For the album’s standout track she assembled a supergroup in all but name, comprising Wendy & Lisa, Linda Perry and Barney Sumner and Peter Hook from New Order. In lesser hands this would have been an unmitigated disaster, but in Gwen’s it’s absolute perfection:

I suspect the trick to marshalling this much talent is to ensure that none of the protagonists actually meet during the recording process, but however the end result was achieved, The Real Thing is a wondrous pop chimera, with every element working at full capacity. Special mention must, however, go to Peter Hook who is at his absolute Hook-iest here.  His unmistakeable bass kicks in after Wendy & Lisa‘s sultry intro, which is succeeded by Gwen’s vocal – and you get a sudden thrilling moment where you get to hear what New Order might have sounded like fronted by a girl.

I was desperate for this to be a single – but it was not to be. Love Angel Music Baby was packed with them, so in the end something had to give. Gwen Stefani, as it turned out, wasn’t quite done with the collaborations – for her next album The Sweet Escape she teamed up with Keane (GWEANE!) to create the equally gorgeous Early Winter. Let’s hope this particular ringmaster hasn’t lost her touch on her elusive but apparently still upcoming third solo album.

Who could sing this today and have a hit? Ariana Grande could pull it off.