Soul Family Sensation – The Day You Went Away 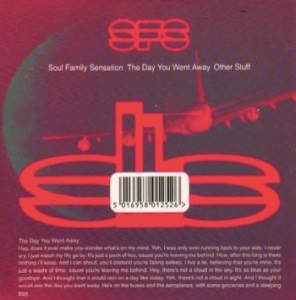 There’s almost nothing more frustrating in the world of pop than witnessing the career of an established artist, who consistently delivers superior quality work, start to dwindle and lose touch with the wider audience they enjoyed in their earlier career. Perhaps the only thing worse is watching a brand new artist fail to make any significant commercial impact, despite producing a critically acclaimed album which seemed to fit perfectly with everything else going on in the charts at the time. Let’s examine the sad fate of Johnny Male, Gut Batson and Jhelisa Anderson, aka Soul Family Sensation and an entire career spent living hand-to-mouth below the Popvoid poverty line.

Between May 1990 and the end of 1992, Soul Family Sensation released three top notch singles, four if you count the fact that their debut song, the sublime I Don’t Even Know If I Should Call You Baby, was issued twice before their label decided to move on to single two, when they chose to release the more upbeat Perfect Day. When their album, New Wave, finally appeared in 1991 it was an eclectic but undoubtedly consistent set of strong songs, displaying rare sophistication for a debut set. It would seem SFS offered a fairly unique twist on the emerging pop/soul/dance genre, something which was proving to be undeniably commercially relevant considering the recent success of acts such as Seal, Lisa Stansfield and Oleta Adams. But somehow nothing stuck and after I Don’t Even Know…stalled at no.49 in May 1991, the album failed to even chart. For me, Soul Family Sensation’s finest moment was their third single, the stark and beautiful, The Day You Went Away.

Covering much of the same ground as The Day Before You Came, ABBA‘s masterpiece of isolation and loneliness played out against a backdrop of everyday routine and mundane domestic chores, The Day You Went Away is a similarly poignant and understated gem. With Bryan Adams‘ (Everything I Do) I Do It For You sitting atop the singles chart for much of the summer of ‘91, perhaps it’s not so surprising that the British public had had it with ballads for the foreseeable, rushing in their droves to buy Right Said Fred, The Prodigy and Vic Reeves’ Dizzy instead over the next few months. The video, a weird mix of 9 ½ Weeks and My Beautiful Launderette probably didn’t help.

While individually the members of Soul Family Sensation would find varying degrees of success on their own – Male would later score a couple of hits as part of Republica, Batson co-wrote Saint Etienne’s Hug My Soul and Anderson was a featured vocalist on The Shamen’s 1993 album Boss Drum, having already enjoyed a top 10 UK chart placing with her contribution to their L.S.I. single. What makes everything about the relative failure of SFS all the more frustrating is the fact that much of the good work carried out by the band, while ignored in its original form, proved successful for others. In 1995, Rozalla managed to chart a cover of SFS’s debut, now shortened to a much more manageable Baby and most startling of all was Australian singer/songwriter Wendy Matthews’ version of The Day You Went Away. Stripped bare of its lush electronics and stuttering beats, Matthews performs the song as a straight-forward piano ballad and makes the type of emotional connection to the song which turned Oleta Adams’ version of Brenda Russell’s Get Here into a top 5 hit on both sides of the Atlantic. Matthew’s version of the song won the Best Selling Single of 1993 award at the Australian equivalent of The Brits that year and powered her album, Lily, to huge success in her homeland. Worth a quick listen all on its own, although its The Notebook style video might make you wish she’d gone away a day earlier.

Who could sing this today and have a hit? – This feels like a perfect fit for Birdy, and with an established predilection for covers, it’s not too much of a leap to imagine her actually doing it.