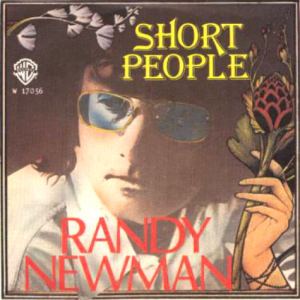 What makes a song so horrific or offensive that is worthy of being banned from radio airwaves? In the UK, it has been a variety of things, from singing in a derogatory manner about royalty (God Save the Queen by the Sex Pistols) to simulated ejaculation (Frankie Goes to Hollywood’s Relax) or to simply referencing Coca-Cola (Lola by the Kinks.) In the US, it has almost invariably been due to references to sex or violence (see Let’s Spend the Night Together by the Rolling Stones or Cop Killer by Ice-T and Body Count). Every once in a while, however, a song is removed from radio playlists for reasons that are simply and truly bizarre. Case in point:  Randy Newman’s 1978 US smash hit Short People.

Often considered one of the greatest pop songwriters of all time, Randy Newman has written dozens of classic hit singles, from Joe Cocker’s You Can Leave Your Hat On to Three Dog Night’s Mama Told Me Not to Come. He has written the scores for many hit films and later in his career became a regular in the army of Disney songwriters, winning an Oscar for If I Didn’t Have You from Monsters Inc. In the early part of his career, he had great success writing songs that were big hits on the UK charts, including Gene Pitney’s Nobody Needs Your Love and Cilla Black’s I’ve Been Wrong Before. Harry Nilsson even recorded an entire album of Newman songs in 1970 (entitled Nilsson Sings Newman) and Newman’s own album 12 Songs is considered one of the ten best albums of the 1970s. In the US, however, prior to 1978 he remained only a cult favorite, adored by critics and fellow artists but not a huge record seller.

Until Short People. The first single from his Little Criminals album, the song appears on its face to be an attack on the vertically-challenged, who, according to Newman’s narrator, have “no reason to live.” The song goes on to list a litany of problems the singer has with short people, who “walk around telling lies,” “wear platform shoes on their nasty little feet,” and “got grubby little fingers and dirty little minds.” Because of these issues, Newman states that he “don’t want no short people ‘round here.” On first listen, the song appears to be saying something akin to “nasty dwarves, take a hike!”

This, of course, ignores the fact that the song is completely ironic. Like many of Newman’s compositions, the song is sung from the perspective of an unreliable narrator. It is the character that Newman has created here that is attacking the little folks, not Newman himself. This distinction, however, was lost on many in the American listening audience when the song was released.  The negative response was widespread and crazy: many listeners believed Newman was actually calling for the execution of the diminutive.  Radio stations across the country (including my own local Top 40 station in Seattle) banned the song (even pulling it from national countdown shows like Casey Kasem’s American Top 40). In Maryland, legislation was introduced to make it illegal to play Short People on the radio, although thankfully the bill did not obtain enough votes to pass.

Like many songs that are banned, the end result of this was of course to send sales skyrocketing.  Short People zoomed to no.2 on the US charts and became one of the best-selling songs of 1978. Despite Newman’s success as a songwriter for UK artists, the song failed to chart in Britain. In fact, even though he is member of the Rock and Roll Hall of Fame, Newman has not had a single entry on the UK charts for any of his songs (and that includes the beloved Disney classic from Toy Story, You’ve Got a Friend in Me.)  It could be that UK radio programmers in 1978 had enough to deal with given the rise of punk, and didn’t want to risk incurring the ire of any irony-blind supporters of the little people lobby.

Entered chart:  did not chart

Who could sing this today and have a hit? Given that he had a hit with the similarly ironic Big Girl (You are Beautiful), Mika could have fun with this. (Once again loving your optimism – Ed.)