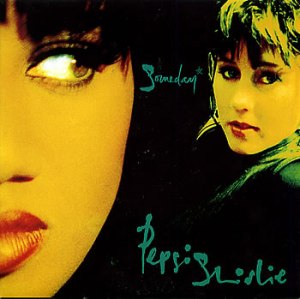 Time moves in strange ways in pop music: 1987 and 1991 may only be four years apart, but that short period ushered in so many changes that sometimes it feels like a hundred. It must certainly have felt that way for Pepsi and Shirlie, whose return in 1991 was a bit like a relic from a bygone age turning up in a car boot sale, only without the accompanying excitement. This was all a bit of a shame actually, because what they came back with was unexpectedly brilliant.

In 1987 Helen “Pepsi” DeMacque and Shirlie “Shirlie” Holliman made the incredibly rare switch from backing vocalists to actual proper pop stars – but then as George Michael and Andrew Ridgeley‘s counterparts in Wham! they’d always tended to be a bit more front and centre than was usual. So when Wham! signed off in 1986 I think everyone expected them to carry on together, and they didn’t disappoint – their debut single Heartache soared to no.2 in early 1987 with cowbell heavy follow-up Goodbye Stranger (produced by Phil Hammond, naturally) reaching no.9. But then some terrible decisions were made. After the third single Can’t Give Me Love flopped (quite rightly, it’s beyond insipid) the Emergency Cover Version was deployed. I have no idea who decided that Free’s All Right Now was the song to pick – and even name their album after – but Pepsi and Shirlie as a leather clad rock proposition just did not work, and both single and album bombed.

By mid 1988 it appeared to be all over – so when I wandered into Glasgow’s Byres Road branch of Fopp one day in 1991 and found a new Pepsi and Shirlie single in the 99p section at the counter, I was absolutely dumbfounded. I snapped up it immediately, and it’s a decision I will never regret: Someday is bloody ace.

If this is the first time you’ve heard it – which is entirely possible – there may be a nagging little feeling growing in your brain right about now, and what that feeling is telling you is that this song is strangely familiar. And that’s because the whole thing was written and produced by P&S’s old pal George Michael, who would rejig the whole thing a year later for the smash hit Too Funky. Someday possesses many of the same production tricks – doffing its cap towards swingbeat but remaining firmly pop, it’s got the same swagger and attitude but is actually the better song of the two.

I’m not quite sure what sort of record company shenanigans were going on at the time, but I suspect that Pepsi and Shirlie had a two-album deal that Polydor were somehow unable to extricate themselves from. It’s about the only thing that explains both the existence of a second album (Change) and the total lack of promotion it received, apart from an appearance on Pebble Mill at One.

Someday sank utterly and undeservedly without trace. The next time we were to hear from Pepsi and Shirlie  it was 2000 and they were back to their old job, only this time backing up Geri Halliwell on the no.1 hit Bag It Up. I wonder if George Michael got them the gig?

Who could sing this today and have a hit? Perfect for Jennifer Hudson.