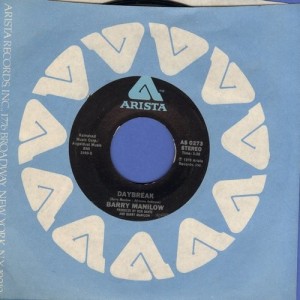 One of the joys of being little is that you have absolutely no idea about concepts of cool. I’ve tried to retain that in my adult life, believing that if you make a good record it doesn’t matter who you are or how you’re perceived. This is why I will defend Stars Are Blind by Paris Hilton to the death and routinely cite Party in the USA as mankind’s greatest achievement in recorded music. *awaits sudden drop in Twitter followers*

Like many of my generation I was brought up on Radio 2, and some of my earliest musical memories are associated with playing on the kitchen floor while my mother made shortbread, or perhaps macaroni cheese (always use cornflour for the roux if you want a silky smooth sauce).

As far as this youngster was concerned, Barry Manilow was the greatest thing on earth. You could reasonably expect to hear Mandy or Could It Be Magic or Copacabana (at the Copa) at least once during the week on shows by Terry Wogan, Pete Murray or Jimmy Young, and these were songs that really made me sit up and listen – only Abba had more of an effect on me. And possibly Mirrors by Sally Oldfield.

As a budding Fanilow, one song that completely passed me by was Daybreak, which despite being a top 30 US hit (as a live single, of all things) completely missed the charts here in the UK. It wasn’t until its prominent use in John Waters‘ 1994 movie Serial Mom that I became aware of it and immediately began rueing 18 lost years of enjoyment. I’ve more than made up for it since then though, and if I ever get the urge to clean the blinds on a sunny day, this is the song I do it to.

If Daybreak were a person I imagine they would swiftly become a bit annoying. It’s all light and absolutely no shade, and anyone that relentlessly upbeat would tire you out within minutes. But by gosh, as the musical equivalent of a double-strength Berocca it does its job terrifically well, even if it does give you the slight urge to run out and join a cult. Whenever I listen to it I feel absolutely invincible and the world seems full of promise. Inevitably, thanks to the iTunes randomiser, something depressing by Depeche Mode will come on next and kill the buzz, but it’s amazing while it lasts.

Its connection to John Waters means that I also have a tendency to associate this song with extreme violence and pussy willows, but that’s no bad thing is it?

Who could sing this today and have a hit? The only way this could ever happen is if it was turned into a terribly downbeat piano ballad, dripping with irony and used in the soundtrack to a film about dystopian post-nuclear world. Paging Gabrielle Aplin.