Frances Ruffelle – God Watch Over You 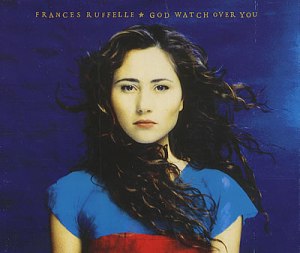 At this time of year it’s always good to count our blessings and spare a thought for those less fortunate. In the wake of tabloid headlines announcing that yet another member of boy band Blue has been forced to file for bankruptcy and, perhaps saddest of all, the news that Bonnie Tyler has amassed such a huge Eastern European fanbase, she may never stop touring there, let us pity the almost inevitable sad fate of whoever grasps the poison chalice that is singing the UK’s Eurovision Song Contest entry. While it’s not all doom and gloom, it’s hard to ignore the nagging little voice in your head going, “Don’t do it. Remember Bardo“.

In the early years of the competition, when more established acts were given the dubious honour of representing their country, things usually played out a little differently. In what looked like a slightly less dangerous version of National Conscription, acts would perform what equated to their ‘military service’, all be it with kicky, synchronised dance routines replacing marching in formation and with a few more sequin on their uniforms. But as things moved on from the era of Cliff, Sandie, Lulu and Clodagh – who all, to varying degrees, managed to keep their careers going (some might say to a fault) – things started to take a more uncertain turn as the UK began manufacturing artists with the sole purpose of winning the competition. So, while the likes of Brotherhood of Man and Bucks Fizz managed to make a bit of a go of it after they’d won (in 1976 and 1981 respectively) others random selections of Euro-Bots were not so lucky (Prima Donna, Co-Co and Sweet Dreams…anyone?)

And so to the ‘modern era’, where inconsistency doesn’t really cover the UK’s attitude towards Eurovision, or the song and artist who are chosen to represent us. We’ve gone from picking the artist and song in a televised voting process to the situation we have this year, where someone we’ve never heard of ends up singing a song we have had no hand in choosing. Perhaps the most successful means of finding our perfect Eurovision entry involved the public voting for their favourite song from a handful of hopefuls, all performed by the same, pre-determined artist. It was a system which had served us well through the mid 60s and into the 70s, and had delivered a couple of ‘close but no cigar’ results for Michael Ball and Sonia (with One Step Out Of Time and Better The Devil You Know respectively), who both finished in 2nd place when the system was re-instated in 1992-1993. Step forward, successful West End star, Frances Ruffelle who continued the practice in 1994, when the Great British public chose Lonely Symphony (We Will Be Free) as our entry that year. Finishing tenth and charting at a relatively lowly no.25 in the UK singles chart, it was not considered a ‘good year’ for anyone involved. And here is where the ‘Curse of Eurovision’ conspiracy theorists may have a point. A year later, Miss Ruffelle went on to make one of the best pop singles of the year, which somehow managed to make no impact on the UK top 100 singles chart whatsoever, signalled the end of her short-lived pop career and sent her high-kicking back to the West End stage for an acclaimed turn as Roxie Hart in Chicago and, perhaps a touch less rewardingly, a recurring role in the recent Birds of a Feather reboot.

God Watch Over You is the musical equivalent of an extra fancy Nigella Lawson recipe, where all the finest quality ingredients somehow come together to make something even more extraordinarily delicious than the sum of all its parts. Take one top drawer tune by Prefab Sprout’s main man, Paddy McAloon, stir in a couple of producers who know a thing or two about delivering a decent pop record, in the shape of Guy Chambers and Phil Thornalley, with just a pinch of a radio friendly remix from Stephen Hague. The result is a near-perfect pop confection which wouldn’t sound out of place beside McAloon’s If You Don’t Love Me, Thornalley’s production of Natalie Imbruglia’s Torn, Chambers’ best work with Robbie Williams and almost anything from Hague’s synth-pop heyday.

Blessed with what sounds like a choir of angels having multiple orgasms at its half-way point, God Watch Over You is more wonderfully joyful and uplifting than virtually any other record released that year. But with the charts in full-on party mode in 1995, overflowing with the likes of The Outhere Brothers, Alex Party, N-Trance and The Prodigy, maybe a former Les Misérables star singing about God felt like a bit of a come-down. Apparently relegated to the ‘recipe for disaster’ pile, it’s a tasty treat I personally can’t get enough of. I guess that’s why you’ll always find me in the kitchen at parties.

Who could sing this today and have a hit? – In that it already feels exactly like the kind of song they’d write and produce for some pop starlet or other, I’d like to hear a Pet Shop Boys cover version of this produced by Stephen Hague and remixed by Trevor Horn – just imagine what those angels would sound like after he’d finished with them.