Marc Almond – Meet Me in My Dream 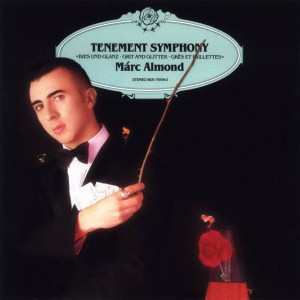 I don’t know whether it’s getting older that does this to a person, but the ten years between Soft Cell‘s Non Stop Erotic Cabaret and Marc Almond‘s Tenement Symphony seem to me like a far bigger slab of time than the subsequent twenty-four. It probably is the age thing – I was a slightly fey nine year old when Tainted Love was at no.1 and would make my brother laugh by re-enacting Marc’s wrist-bump when it played on the chart countdown on Sundays; by the time Jacky was released, I was a slightly fey nineteen year old and had just started my second year at university in Glasgow. With a couple of school friends I’d moved into a vaguely shabby sandstone tenement in Maryhill, and Tenement Symphony naturally became the soundtrack for our first few months there.

Going through a faintly pretentious phase that we’ve yet to emerge from, the album – with its Deutsche Grammaphon-style sleeve, preludes, interludes and heady grit and glitter mix, felt like an introduction to a world we couldn’t wait to be a part of. It also, by virtue of its Jacques Brel cover version, served as a back-door introduction to Scott Walker. For arts students with delusions of grandeur it was pretty much everything. Meet Me in My Dream was the album’s opening track and although it was never a single, it is for me the quintessential Marc Almond song.

The story of an elderly pair of childhood sweethearts who’d scrimped and saved for a “cupboard with a view” deciding to blow it all and head off to Vegas for a last, one-way adventure of “roulette wheels and reckless nights”, it is almost unbearably sad/happy: “Meet me in my dream / I won’t fall asleep without you / So meet me in my dream / It’s lonely there without you.” The production by The Grid (Almond’s Soft Cell partner Dave Ball and Richard Norris) has a wonderful sort of cheap majesty to it that suits the subject matter perfectly:  Blackpool meets black-tie. Lest we forget, Almond was well known as pop’s premier pervert, but this – along with the album closer My Hand Over My Heart (produced by Trevor Horn, and possibly the best example of orchestral pop ever) – showed that he also made for a magnificent romantic.

In his autobiography Tainted Life, Almond is rather sniffy about Tenement Symphony, which comes as a bit of a disappointment. What I’d imagined as this grand, personal concept turns out to have been dreamed up by WEA boss Rob Dickins, even down to the title, sleeve (which Almond hated) and choice of Jacky for inclusion. Almond was “beaten into corporate submission” – he’d wanted a “scratchy, sampled R&B soul album with the producer John Coxon” and what he got was a glossy, theatrical explosion – although he does concede that he was very pleased with much of the Trevor Horn helmed half of the album. But that’s artists for you I suppose. In a way it doesn’t really matter what he thinks of it – once it’s out in the world it becomes a thing for other people, and this particular person adored it. And as it happens, this person would also quite like a deluxe remaster packed with bonus tracks. Surely it’s only a matter of time.

Who could sing this today and have a hit? I’m not sure Marc Almond‘s natural heir has yet revealed him/herself, but Will Young could make a decent fist of it.