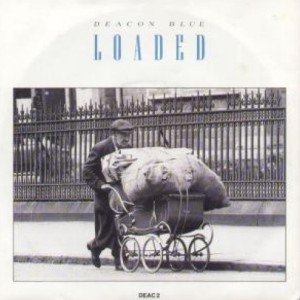 Nothing – not even a cold macaroni pie from Greggs – makes this ex-pat Glaswegian well-up like the opening bars of Deacon Blue‘s 1987 debut Raintown. It probably helps that the record came along at a time when I was a big bag of hormones, but as soon as Born in a Storm starts I always have to resist the urge to book the Megabus back home.

Coming out three years before I moved to the city, the very gallus Raintown – with its Oscar Marzaroli images, Sunblest bags and the feel of sunshine on wet pavements, played a big part in demystifying Glasgow for me, in much the same way that everything Saint Etienne did helped clear up a lot of my London issues. As a boy from Dumfries who spent his teenage years in the countryside rambling up and down hills, cities were scary places – music was the thing that connected me to them and turned me from clueless country boy into the total dick I am today. I’m very grateful.

For a long time Deacon Blue felt like a particularly Scottish secret, with Raintown being one of those slow-burn albums that spent forever in the lower reaches of the chart without ever making the top 10 (it peaked at no.14). It took a while for them to nab a hit single – a re-released Dignity eventually made no.31 early in 1988 – and it’s to my eternal regret that their second release, Loaded, came too early in their career to be a proper hit.

If you were to send a capsule into space with just one song to represent Deacon Blue – maybe even Scotland itself – Loaded would be the one. Whether you take it as a song sung to a rich person or to London, it’s a very Scottish take on the whole have/have not situation. There’s no chip on the shoulder, just an entirely pragmatic, maybe a bit resigned “I have found an answer / I don’t think you don’t care / Just you laugh ’cause you’re loaded / And things are different from there.” It’s a record that spends its four minutes climbing through both moods and chords, with each step becoming more and more joyous until you either burst out crying or start hurling yourself around with unrestrained abandon. Ricky Ross and Lorraine McIntosh – one of pop’s great boy/girl partnerships – seem to spend the whole song egging each other on in a fantastically ramshackle sort of way, and they make the whole thing utterly irresistible.

Deacon Blue always had an air of street urchins rubbing their noses in the windows of shops they couldn’t afford, and it’s a point driven home by Loaded‘s video, where they lark about dangerously in a clapped-out convertible whilst whizzing past various London landmarks, like excitable Bisto Kids wafting along on the scent of money. Brilliant.

By the time the Raintown campaign was done, Deacon Blue had quietly gone platinum and built up enough momentum to ensure their next album, When the World Knows Your Name, could knock Madonna‘s Like a Prayer off no.1 without anyone batting an eyelid – proof that hard work and catchy tunes will eventually pay off, as long as you have a ton of major label cash behind you.

Now, if you will excuse me, I have a Megabus to catch.

Who could sing this today and have a hit? Prides could synth the hell out of this.