Sting – We’ll Be Together 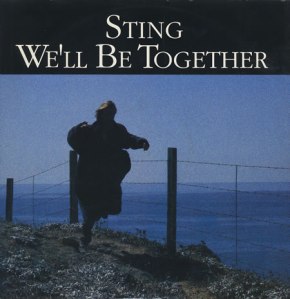 Why does everyone hate Sting? Ok, let me re-phrase that. Why did British singles buyers hate Sting? One more question and then I’ll move on to make my point. How many solo top 10 singles do you think Sting has had? Let’s do the math. There are eleven solo studio albums, with, let’s say, an average of three singles released from each album. Add in a few collaborations, non-album singles and live tracks and that comes to about 40 singles eligible for the UK charts. So, what do you think…maybe ten solo top 10 hits, fifteen, twenty? The answer is three. One of them is a three-et (threesome? three-song?) with Rod Stewart and Bryan Adams and another is little more than a re-sung sample on a Craig David hit. That means Sting has only really had one proper top 10 solo hit – When We Dance, which peaked at no.9 in 1994, and even that was a new song added to a ‘Greatest Hits’ album almost a decade into his solo career. Sorry, one more question. How’d that happen?

While it’s not too difficult to comprehend the lack of recent hits – what with Sting’s preference for writing song cycles about Newcastle shipbuilders and winter themed sonnets – but at the point he was ‘set free’ by The Police (please, let me have one police pun) it really should have been a fait accompli.

The Police had an incredible hit rate. After a shaky start, which saw the band’s first four singles flounder at the lower end of the UK charts or fail to register at all, once Sting, Andy Summers and Stewart Copeland started to actually have hits, they never stopped. While the band was still together, they released fourteen ‘proper’ singles and hit the top 20 every time – ten of them actually entered the top 10, with five of those climbing all the way to no.1. So how come Sting’s first solo single proper, If You Love Someone Set Them Free, stalled at no.26 and set a pattern for much of the rest of his singles career? When Phil Collins started his solo career, alongside his parallel duties as Genesis’ drummer/singer, he took much of the band’s fan base with him, and even managed to persuade their wives and girlfriends to come along. His first solo single, In the Air Tonight, was arguably Collins’ best loved song, his biggest international hit to date and kick-started a run of big hit records. Look, even Limahl’s first solo hit after leaving Kajagoogoo, Only For Love, managed to make it to no.16.

While I’m not exactly expecting a ‘Poor Sting’ campaign to go viral – he managed to score more than twenty top 40 singles, a couple of number one albums and he did have an awful lot of really long sex over the years – but it does mean he’s had more than his fair share of ‘hits that should have been’ falling into the Popvoid, with none more deserving of a re-appraisal than 1987’s We’ll Be Together.

We’ll Be Together was the first single released from Sting’s second solo effort, …Nothing Like The Sun, and as such, must have been expected to deliver a decent sized hit. And it did…but only in America. Building on the quartet of top 20 hits he’d scored from his debut, The Dream of the Blue Turtles, We’ll Be Together reached no.7 on the Billboard Hot 100, but somehow spluttered to a halt at no.41 in the UK.

Altogether more carefree and positively breezy in comparison with some of Sting’s more politically minded songs, We’ll Be Together is an optimistic love song with little more to say than “I need you as my guide and my light / My love is a flame that burns in your name”, which might explain Sting’s rather dismissive attitude towards the song at some later stages of his career. Still firmly adhering to the white-funk/jazz groove he inhabited for his first few solo projects, We’ll Be Together is given a pop spin by a nagging sax/keyboard line which gives the whole track a relentlessly hypnotic hook. Fleshed out by some magnificently soulful female backing vocal chants and some cheeky lyric pilfering from his own If You Love Somebody, it all adds up to a big summer smash – only it was actually released in early November and was a resounding flop. To add insult to injury, there’s even a pretty great twelve inch mix which drags Sting kicking and screaming onto the dance floor without it feeling like a record company induced compromise – see the Ben Liebrand remix of An Englishman In New York for further details.

So why was a flop in the UK? When describing the ideas behind the We’ll Be Together video with Billboard, Sting said, “It’s a very surreal film set in modern times, after the war. This person playing Orpheus goes through a door and suddenly he’s in the Underworld and has to rescue Eurydice…” Let’s stop him right there. I think we may have hit on the problem. Does it have something to do with the air of pretentiousness Sting had started to wear like a gag inducing cheap cologne around that time?

Perhaps it’s something best exemplified by the interview Sting gave to Max Headroom in 1985 – the computer generated (although not really) pop presenter and future Art of Noise duet partner – which went something like this:

Max Headroom – Sting, I hear your new album has a different feel to it. You’re working with jazz musicians….Trendy!

Sting – It’s part of my responsibility, in the language of whatever country I’m visiting, to explain what my songs are about.

Max Headroom – Okay! Now, tell me what you really think.

Do we just have a complete aversion to the pompous and intellectually preachy? Me? I think it’s really just ‘the sex thing’.

Who could sing this today and have a hit? – Well I’ve been looking for something to launch Chris Martin’s solo career. My first choice was this year’s Eurovision winner, Heroes, but as that managed to deliver a top 20 hit for Måns Zelmerlöw shortly after the competition, let’s see if he can add a few more pennies to ‘poor’ Sting’s retirement fund.