It’s time to talk about cover versions, and specifically why they happen so often considering they pay for someone else’s swimming pool and not your own.

Pop stars sing the songs of other pop stars for a variety of reasons – perhaps as a tribute to a favourite influence, or maybe because the track speaks to them, or they’ve thought of an exciting new spin on a classic. But let’s be honest, it’s usually a quick-fix career Elastoplast that works more often than not but is frequently only a temporary solution to a larger problem.

It’s also time to talk about b-sides. They’re more or less a thing of the past now, but until the demise of the CD single they were an integral part of the package for major pop fans like myself, and played an important role in pushing singles up the chart, especially when you got to the third or fourth release from an already heavily purchased album. Now, some people will chuck any old tosh on – an album offcut or demo, or pointless live track, but some pop stars treated the format as an art form in itself, and none more so than Pet Shop Boys, who would go into the studio specifically to record new material for inclusion on a single release. Some of their best work – Your Funny Uncle, A New Life, Jack the Lad and Hey, Headmaster was to be found on the flip side. Probably the best of the lot was Do I Have To?, which found a home on the single release of Always On My Mind, 1987’s UK Christmas no.1.

Now let’s talk about someone who did a cover version of a Pet Shop Boys b-side: Germany’s Inga Humpe, lately of Swimming with Sharks. Despite the total failure of the duo formed with her sister Anete Humpe, WEA Records saw enough potential in her to chuck a fair bit of money at her solo album Planet Oz, roping in Trevor Horn on knob-twizzling duty for first single Riding Into Blue (Cowboy Song), and as we all know, he doesn’t come cheap. It got a fair bit of exposure on The Chart Show, but inexplicably only made no.93 on the chart. For the follow-up, a cover of a song by a well-loved pop institution that was already in at least half a million homes wasn’t a bad idea.

Inga’s rendition doesn’t stray too far from the exquisite original, adding just a few King’s Cross-y embellishments to create a slightly poppier but no less lovely version. Pet Shop Boys were always particularly good at writing songs about the awkwardness of love (“Do I have to? / Don’t say / That I need to / Love you”) and often they were particularly suited to the female viewpoint – Inga proves to be the perfect partner for the lyrics, her dispassionate vocal sounding a bit bored, faintly exasperated and slightly nervous at the same time. I particularly like the way she chucks a plaintive spoken “blackmail!” over the same sung word – it sounds really desperate, sort of like she’s falling past your office window.

Unfortunately, there’s no point deploying a Pet Shop Boys song as your Emergency Cover Version hoping to land high in the charts – pull that ripcord and you’ll find there’s no parachute in your backpack. I’ve never understood quite why this is the case, but almost everyone who’s tried it has come a cropper in one way or another. East 17 famously – and quite rightly, as it’s dreadful – missed the top ten with their “this was Tom Watkins‘ idea and we’re not happy about it but he’s got us over a barrel so what can you do” retread of West End Girls, and since then any hint of PSB involvement has resulted in a curious under-performance. Girls Aloud, fresh from their biggest ever hit The Promise could only scrape to no.10 with The Loving Kind, and Robbie Williams‘ collaboration She’s Madonna petered out at no.16. Back in 1990  it might have seemed like a safer bet, but sadly for Inga, Do I Have To? didn’t even crack the top 100. What a waste of a potentially very good pop star indeed. 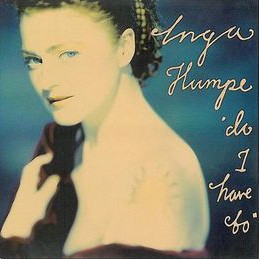 Who could sing this today and have a hit? I don’t fancy anyone’s chances, sadly.