Betty Who – Somebody Loves You

This week, a good friend pointed out that I may just be the only person in the UK who even knows that Glee is currently playing out its final few episodes on Sky 1, much less watching them. Reading between the lines, it would seem our long-standing friendship was the only thing stopping her from thrusting the ‘L’ shaped finger and thumb sign towards her forehead and brandishing me a ‘Loser’. And while even I will admit setting up the ‘series link’ felt more like a ‘pity click’, borne out of a sense of duty rather than genuine excitement, I’m glad to report that even in its death throes, Glee is still managing to deliver some pop.

It’s hard to imagine now, but way back in 2009 Glee was a runaway ratings hit and became a genuine pop culture phenomenon right out of the traps. The average ‘live’ viewing ratings in the US for season one were approximately 10 million per episode – to put that into some perspective, Game Of Thrones‘ highest viewed episode in the US – the season 5 finale – attracted just over 8 million viewers last year and more people watched Glee’s season two, post Super Bowl episode live (26.6 million) than watched the entire debut season of HBO’s most buzzed about (and expensive) show.

Lest we forget, it wasn’t just TV executives who were rejoicing; the music industry as a whole also had something to celebrate. The Glee cast recordings spawned (exactly) 100 UK top 75 hits in a little over four years (with dozens of those making the top 40) and, as I pointed out in another piece, it was Glee-mania which finally turned Journey’s Don’t Stop Believin’ into a top 10 hit here in the UK, and not only for the band themselves – the Glee Cast version also peaked at no.2 in February 2010. The hits may have dried up a couple of years ago as viewing figures fell, but if I am the only person still watching Glee in 2015, I’m glad I kept the faith, because despite some narrative déjà vu and obvious fatigue, it still has the power to deliver a killer cover version and this year I even discovered a glorious new pop star in the shape of Betty Who.

Who – born Jessica Anne Newham – was something of a multi-instrumentalist prodigy and began writing her own songs at the tender age of 14. Like her fellow Australians 5 Seconds of Summer, she began her pop career by self-releasing her music online before signing a deal with RCA Records in 2013. Her debut, full-length LP, Take Me When You Go, managed to break the US top 75 album chart despite failing to make much of an impression on her home turf.

Exuding much of the same effortless cool which has afforded Robyn her place as Into the Popvoid royalty, Who’s signature sound is a melting pot of Kelly Clarkson-esque ‘motivational seminar speak’, Pink’s ‘pull no punches’ empowerment, with a hint of Gaga’s exploding glitter-ball, all played out over a bank of electronic sequencers and delivered in an irresistibly eccentric accent which all too often, inexplicably, strays towards the same weirdly ‘clipped’ English inflections Britney used to great effect on will.i.am’s Scream and Shout.

Unashamedly retro, but in a seemingly non-ironic fashion, bubbling over with infuriating infectiousness and containing more hooks than a fisherman’s toolbox, Somebody Loves You – the track which featured in this season of Glee – is as joyous a slice of pop as you’re likely to hear. From the opening synth riff – which gives you an insight to what Van Halen’s Jump might have sounded like if it had been produced by Stock, Aitken and Waterman – Somebody Loves You is so mercilessly uplifting, unquestioningly life-affirming and bursting with positivity it makes S Club 7’s Reach sound like something Joy Division might have decided not to include on their debut album using the excuse that maybe it was ‘a bit too bleak’.

I for one am quite happy to throw an ice-cold slushy in the face of the haters who have long since sent their McKinley High jackets to the charity shop or bowed out at the sectionals stage, long before the series’ ultimate finale, because it seems Glee is still as good a place as any to unearth previously unheard pop gems and enrol new recruits to Popvoid’s ever expanding ranks. So, who’s the loser now? 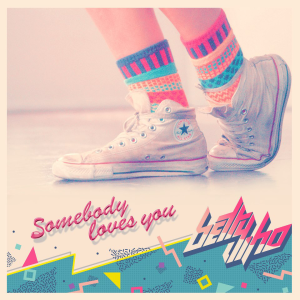 Who could sing this today and have a hit? – In a move not dissimilar to Kirsty MacColl removing her own vocal from her flop single Terry and simply adding Tracey Ullman’s to give her the chance of finally making it a hit – she didn’t, it also stalled outside the top 40 at no.81 – this wouldn’t need much tinkering to turn it into a monster hit for Katy Perry.