Ladytron – Destroy Everything You Touch

I reserve a special place in my heart for the music genre that I shall refer to from now on as the ‘ice cold electro banger’. This relatively niche category has thrown up some of the finest pop singles;  the mere mention of Strict Machine by Goldfrapp, In For The Kill by La Roux and the sublime Dancing On My Own by Robyn, is so thrilling to me I can barely breathe. But top of my go-to list is the iciest and the most banger, um, ish of them all, Destroy Everything You Touch by Ladytron.

Released in 2005 as the second single from their third album Witching Hour, it has become their signature song – and fortuitously it is also a perfect distillation of their sound. I’ve always found a detached female vocal set against a stark synth backdrop just as emotionally involving as any form of R&B vocal gymnastics (honey, come sit by me – Ed.), and Helen Marnie’s vocals create incredible energy when set against the electro backdrop. Her mannered vocal styling brings to mind a pop hybrid composed of Neil Tennant and Claudia Brücken. It’s all rather amazing.

Ladytron are one of those select few bands whose influence on the pop landscape far outstrips the general level of public awareness about them. They were one of the first of a new wave of acts whose sound was influenced by the stark and dramatic synth songs from the early 80s. And unlike other acts who flirted with this aesthetic, Ladytron went for it with gusto. Cold, detached vocals: check. Intense synth soundscapes: check. Kohl-lined eyes: double check. All in place and in order.

And what a slice of pop perfection Destroy Everything You Touch is. After the briefest of pulsating introductions, the pop harmonies set against the motorik style rhythm is at once familiar but thrillingly new. The song launches straight into what is in effect the first of three separate choruses which then proceed to pummel the listener into submission for the full 3.53 runtime. It is quite frankly astonishing and must be played LOUD.

The lyrics are deliberately vague and cyclical but suggest a destructive relationship,  acknowledged by a singer who seems either unable – or unwilling – to extract herself completely from. It’s one of the most bizarre sing-a-longs in pop history.

The twitchy video is a perfect accompaniment to the song. Set in a strange Japanese painting influenced frozen dystopia, the members of the band are attacked by monolithic versions of themselves — a none too subtle reflection of the song’s lyrics.  Interestingly, the band do not appear clearly until about a third of the way through the video. It’s well worth the wait though, because Ladytron have always looked fantastic and co-vocalist Mira Aroyo fights backs in a rather eye-opening way.

Destroy Everything You Touch was followed by the equally brilliant International Dateline, but neither cracked the UK top 40. Sadly, the former remain’s Ladytron‘s highest charting single at no.42.

Other acts have since incorporated the Ladytron sound into their own music and achieved greater commercial success (hello, La Roux and Chvrches), but Ladytron remain unique. And unlike some other Into the Popvoid entrants, they’ve continued to release albums with reasonable commercial success, if not chart bothering singles, up until their extended hiatus from the music scene since 2008.

However, in 2011 they wrote and produced Christina Aguilera’s AMAZING Birds of Prey, which is a Ladytron single in all but name. It ended up as a bonus track (as did most of the best songs) on her botched Bionic album and is deserving of a future Into the Popvoid entry in its own right. Helen Marnie’s 2013 solo album, Crystal World, is well worth checking out too. But let’s hope we don’t have to wait too much longer for the long rumoured new Ladytron album. They are missed. 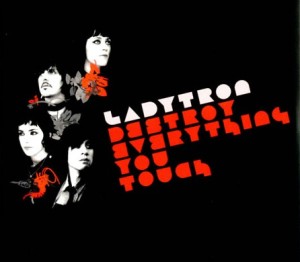 Who could sing this today and have a hit? Everyone knows about my campaign for a Leona Lewis dark electro pop album, right? This will be track number one. Her incredible vocals and slightly detached persona would work perfectly. In fact, let Ladytron produce the whole album. Just imagine…