Where, I ask you, would pop be without obsession? After ‘I love you’ songs, ‘I hate you’ songs and anthems of low self-esteem, ‘I’m collecting your toenail clippings’ songs are probably the most common, so much so that it would be very easy to compile an album entitled Now That’s What I Call Stalking – and what an album it would be. Obviously it would open with Every Breath You Take by The Police, but it would also take in’s Kylie’s Can’t Get You Out of My Head (“There’s a dark secret in me / Don’t leave me locked in your heart”), Heart’s Alone (“I’m wondering where you are tonight / No answer on the telephone”) and Sonia’s You’ll Never Stop Me Loving You (“When I know that you’re alone / I wander to your home / And catch a glimpse or two”), not to mention several different songs all called Obsession, chief among them those by Army of Lovers and Animotion.

The greatest – and most complicated – stalking song ever is of course Following by the Bangles. While a lot of these darker themed tunes get mistaken for jolly love songs and wind up getting played at weddings, any DJ spinning this would find the bookings drying up quicker than you can say Oops Upside Your Head. Following is a rather disturbing record, and without getting too high-minded about things, it introduces a concept that’s more common in literature than it is in pop – that of the unreliable narrator: “You call me a loser / You call me a shadowing fool / Look over your shoulder / And you say I’m haunting you / So, why do you call me? / Why do you look for me? / Why do your eyes follow me the way they do?”

What’s going on there then? Who’s stalking who? Are those following eyes merely wishful thinking on the part of a person who just can’t let go? What was the “trouble after high school between him and you”? And does that ‘him’ mean this is a story of an intense friendship between two girls? There is an awful lot to think about here, and you can’t quite trust that the singer is telling the truth. There’s no resolution, no coda at the end saying ‘here I am in prison’ or ‘but I’m happy now, lol’. It just kind of leaves you hanging and with an urge to check that the doors and windows are locked.

Now, you may be wondering why this was even released as a single in the first place – the Bangles being essentially a rather jolly proposition as far as the British public were concerned. All the singles from Different Light (Manic Monday, If She Knew What She Wants, Walk Like an Egyptian and Walking Down Your Street) had been up-tempo affairs, but none of them had featured Michael Steele – secretly my favourite Bangle – on lead vocals. I was fully expecting the Big Star cover September Gurls to rectify that oversight, but CBS rather bravely chose her self-penned Following instead. Nothing about it – the subject matter,  the sparse instrumentation (just an acoustic guitar and barely there keyboards), the ghostly backing vocals from Susanna, Debbi and Vicki, screamed ‘massive hit’ – but it was undeniably an incredible song that spoke to anyone who’d ever felt an intense yearning. It probably shifted quite a few more albums, which is kind of the point with fifth singles anyway.

As I compile Now That’s What I Call Stalking in my head I realise that this is the tune that goes right at the end. How on earth would you follow Following? 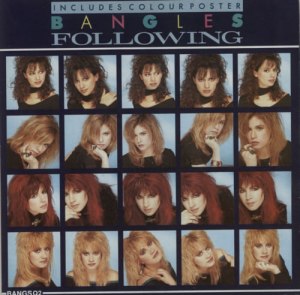 Who could sing this today and have a hit? If there’s a modern pop star with the potential for darkness it’s Miley Cyrus. Imagine waking up with her singing this at the end of your bed, holding a knife.