Hooverphonic – Mad About You

On our travels around Europe we’ve taken in French, German, Norwegian, Danish, Swedish and Spanish pop, but so far we haven’t stopped off in Belgium. This is probably because not a lot of Belgian pop makes it to the UK – presumably a sticker emblazoned with ‘No.23 en Belgique!’ isn’t going to prove an irresistible temptation to British record buyers. And aside from honourable mentions Jacques Brel, Plastic Bertrand, Lara Fabian and, er, Technotronic there hasn’t really been an awful lot to choose from. But gosh, did we miss a trick with today’s subject, Hooverphonic.

If I were forced to describe Hooverphonic in one second to a record company executive, I’d obviously shout “Portishead with tunes!”, and I’m fairly certain it was a description not unlike this which saw their third album, 2000’s The Magnificent Tree gain a UK release and minor promotion in 2001. In truth, their debut single, 1996’s 2 Wicky, with its Isaac Hayes Walk On By sample and whispered vocal, could easily be mistaken for something from Dummy. But gradually the band shook off the trip hop-isms and by the time of second album Blue Wonder Power Milk they were coming up with impossibly sad, ruminative songs like the brass-led Eden, which is one of the most gorgeous things I’ve ever heard.

A no.12 hit in its home country, Eden was never a song with which to launch a UK chart career – Madonna could perhaps have pulled it off circa Ray of Light (and gosh I wish she had) – but it showed a band capable of true greatness. All that was needed was something that would combine that beauty with a bit more oomph and a killer hook – and Mad About You, the lead single from album three, had all those things.

Yes, Mad About You is another entry into my favourite pop sub-genre, Music for Spies. That menacing string intro, full of longing and intent, is about as sinister as pop gets and when the drum kicks off at the ten second mark it’s surely the cue for nude silhouettes to start tumbling across the screen and diving into martini glasses. This epic orchestration is paired with a decidedly jazzy vocal from Geike Arnaert, and it plays brilliantly against the Bassey expectations the song sets up. It’s this – along with the deliciously seedy vibraphone that crops up halfway through – that keeps things firmly in the shadows where they belong and stops Mad About You from being just another would-be Bond theme. Although let’s be honest – it would make a blinding Bond theme.

The first time I heard Mad About You was on a Monday morning in the Virgin Megastore where I worked (this was in the good old days before they took away literally the only good thing about Mondays, i.e.) new releases). I was dusting a display panel in the rock and pop department when it was played on VMR (Virgin Megastores Radio) and within about a minute I was slithering almost involuntarily down the escalator to singles to find a copy – but we hadn’t bothered to stock it. I knew then that it had zero chance of being a hit and silently cursed the marketing department at Sony. I’m sure there’s a solid tax-write-off-y business reason for releasing something with the express intention of having it flop, but when it’s a completely brilliant record it is immensely frustrating – and that’s just for someone like me. How would you react if you were Hooverphonic?

The answer to that question is: in a very odd way indeed. For their next move, they went off and made a – rather good as it happens – concept album about a singer driven insane by the pressures of fame. It ends with a murder-suicide, and despite – or perhaps because – of this, it went platinum in Belgium. Clearly they like things on the dark side over there. 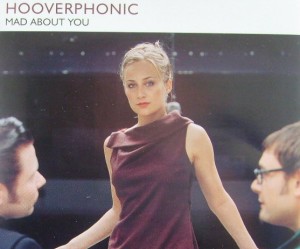 Who could sing this today and have a hit? Look I know we’re all still a bit grumpy with Paloma Faith re: that awful Rugby World Cup malarkey, but she could totally do a great version of this.