Ah, 1989. What a year. Like a Prayer. The Sensual World. Peak S/A/W. Results – of both the exam and Liza Minnelli variety. My last full year at school. Hormones. Yes, it was a thrilling time to be a pop loving teenager. So what if the biggest selling act of the year was Jive Bunny and the Mastermixers? There was an almost embarrassing amount of amazing records that year, and quite a few of them were made by Malcolm McLaren and the Bootzilla Orchestra. When Waltz Darling appeared in the chart in May it felt like some sort of notification – I knew absolutely nothing about the culture that had inspired this completely brilliant song and couldn’t ever hope to replicate the unusual dancing going on in the video, but something about it alerted me to fabulous times ahead. If there was a year that shaped me in to the person I am today, it was definitely 1989 – and the Waltz Darling album played a huge part in that.

Nestling on the b-side of that single was Deep in Vogue, which acted as a sort of equivalent to The Young Person’s Guide to the Orchestra, only it was introducing voguing. I could explain it all at great length but it’s probably easier to just go and watch Paris is Burning. You won’t regret it.

Enter Madonna. Pop’s greatest magpie saw something shiny and flew off with it, intending to create a b-side for Keep it Together before realising that she’d just made arguably her defining record. Vogue emerged in March of 1990 and swiftly conquered the world, spending four weeks at no.1 in the UK. There was a bit of an attempt at a pop row at the time about how she’d stolen the whole idea from Malcolm, but it never amounted to much because she’s always pinched the best bits of subculture and repackaged them for the mainstream. And it was actually a bit of a moot point in this case – notwithstanding the fact that Malcolm himself was appropriating it from the Harlem Ballroom scene of the late 1980s, in pop the concept had been around since as far back as 1975. Nobody ever seems to mention it, but the lead single from Carly Simon’s Playing Possum album was a track called Attitude Dancing, which saw her playing with elements of disco for the first time. Sample lyric: “There’s a new kind of dancing / That’s going to be the rage / You just leave yourself behind / Like an actor on a stage / Cop a different pose / From the pose you’re in / Shine a different attitude / From underneath your skin.” Yes, as far as I’m concerned, Carly Simon invented voguing and we’ll say no more about it.

The happy outcome of all this was that Deep in Vogue finally got released in the UK as a single in its own right (oddly credited this time to Malcolm McLaren and the House of McLaren) – though sadly without the success it truly deserved. Featuring Lourdes Morales and the ballroom scene legend Willi Ninja (who stars in the incredible video and wrote the spoken word intro), it is a glorious thing – a cocky, proud record in a ‘look what we did’ kind of way, honouring a community that was being decimated by AIDS but which refused to stop being fabulous. There’s a particularly magnificent remix by Mark Moore and William Orbit entitled Banjie Realness, which throws in samples from Paris is Burning and is absolutely one of my favourite twelve inches ever. Running to just over nine minutes, it’s a dancefloor epic, history lesson and catwalk extravaganza all in one.*

I’d only just started going to nightclubs at this time, so I can’t really say how much voguing actually took off – certainly no-one in Dumfries was forming their own House –  but I don’t think starting a craze was ever the point of Deep in Vogue. The main point of it was to be a brilliant record – which it was – and also to celebrate a group of amazing people and the art form they’d created. 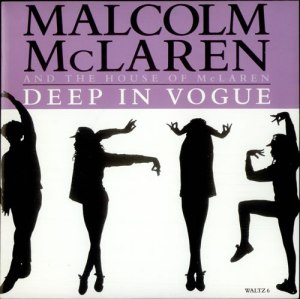 Who could sing this today and have a hit? Gaga.

*Years ago I made an amazing mix of this and Madonna’s Vogue, which sadly keeps getting taken down from Soundcloud. It’s quite exciting, if you like that sort of thing.