Throughout his career the extravagantly talented Prince has not only recorded and released his own albums at an almost yearly rate, he has given away dozens of songs to other artists. While some have become huge signature hits for their respective acts (Manic Monday by The Bangles, I Feel For You by Chaka Khan and The Glamorous Life by Sheila E.), others such as the remarkable Mia Bocca by Jill Jones remain almost unknown to the casual listener.

Jill Jones – a talented vocalist and songwriter in her own right – was back-up singer to R&B legend Teena Marie in the early 1980s, before meeting Prince who loved her voice and encouraged her to pursue a solo career. She is the platinum blonde in his 1999 video, and her distinctive voice can be heard on a number of Prince (and associated artists) songs throughout the 80s. Most iconically, she is the waitress in the Purple Rain film. She steals every scene she’s in and at one stage Jill was going to have her own performance in the movie, singing the Prince written piano ballad Wednesday. It has become something of the holy grail for Prince collectors but remains unreleased.

Four years in the making, Jill Jones’ eponymous debut album from 1987 is the most distinctive and consistently excellent Prince associated project. Mia Bocca (Italian for ‘my mouth’) was released as the album’s launch single, ably supported by a Jean-Baptiste Mondino directed video. Although Jill shared official writing credits, the song was written solely by Prince. In fact it was written way back in 1982 (remarkably the same recording session also produced Little Red Corvette and 1999) but Prince heavily revised it as part of his Parade album sessions in 1986 – an instrumental version plays briefly in his Under The Cherry Moon film.

There is no doubt it is one of Prince’s finest and most playful productions and its arrangement was highly unusual in pop at the time. The combination of a hard, electronic beat, synths and a full orchestral arrangement (courtesy of Clare Fischer’s orchestra) is a sound that has provided some of his most enduring pop compositions. You can certainly argue the Pet Shop Boys equally epic Left To My Own Devices and Bjork’s album Homogenic (both combine electronic beats with strings) owe a debt to this production style.

The song has a strong European flavour and the lyrics (a combination of deliberately provocative, dreamy and poetic, even referencing Fellini at one point) seem to suggest Jill is prepared to allow her suitor to give her a kiss (“I’ll pretend I’m in a movie”) but that’s as far as it goes as ‘she loves another’. Jill has style and attitude to spare and totally owns the song – as the lyrics switch back and forth between English and Italian, it’s made abundantly clear that she’s struggling with her desire: “I’m going koo koo”.

The original 7.21 minute version of Mia Bocca is the one to listen to. Beginning with a gorgeous gospel vocal intro backed by a swoonsome orchestral arrangement, a startling electronic beat is introduced as the song leads into its first verse. The song builds towards its climax with a trumpet solo, before the full string, woodwind and brass section thrillingly bursts into life. Jill, in blissful exhaustion whispers ‘Mia Bocca’ as the song concludes. If I smoked, I’d light up a cigarette.

Despite strong reviews, the Jill Jones album gained little promotion and subsequent top-notch singles G-Spot and For Love also failed to chart. This would be Jill’s only Paisley Park Records release – she left the Prince camp in the early 90s.

Out of all the Prince associated acts, Jill sounded the most like herself, and in the intervening years the album has grown in stature. Jill has continued to sing, write and record, working with acts as diverse as Chic and Ryuichi Sakamoto – her latest album I Am has just been released – what better time to give her a listen. 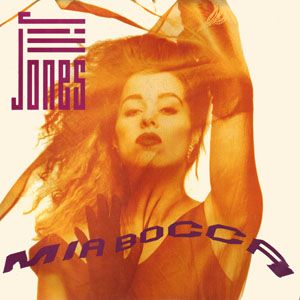 Who could sing this today and have a hit? Imagine Madonna going back to her 80s pop roots and releasing this. Or (with some minor lyrical amendments) let Carly Rae Jepsen give it a go.