One of the greatest pleasures for a pop fan like myself is all that lovely anticipating I get to do in the gap between albums – in fact if I add it all up I’ve probably done more waiting and wondering than I have actual listening. There is always something to think about, much of it based on fear – specifically the fear that the next album is going to be a bit rubbish and send your favourite act spiralling towards the dumper. Of course this fear increases directly in proportion to the length of the gap, as Rihanna fans have recently discovered, and eventually there comes a point when just about the only possible outcome is mild disappointment.

More than anyone else, pop stars are filled with self-doubt and prone to tinkering with things until they’re perfect, and this is why they sometimes take so bloody long, and also why the role of the producer is so important. I heard Pete Waterman on Radio 4 the other day talking about the late George Martin, and he mentioned that one of the most vital skills a producer needs to possess is the ability to say “that’s it” – and then presumably frogmarch the band out of the studio before they can overdub another mandolin solo. Apparently George was particularly good at this, but then he never came up against Tears for Fears, did he?

In 1989 Tears for Fears had been away for four years – which seems like nothing in a post-Aerial world – but back then it felt pretty much like forever. The making of The Seeds of Love (the Apocalypse Now of pop) probably deserves its own documentary – it went through through four producers and in Roland Orzabal’s quest for perfection the relationship between him and Curt Smith was destroyed for a good ten years. Of course we didn’t know any of this at the time – all we could do was wait and wonder and get a little bit scared. Given that 1985’s Songs from the Big Chair featured one of the decade’s greatest singles (Head Over Heels) and had made them one of the biggest acts in the world, there was much to worry about.

When they finally re-appeared in August 1989, I don’t think any of us knew quite what to expect – but did any of us really expect Sowing the Seeds of Love? I think I first saw it on The Chart Show on a Saturday morning, and afterwards I just sort of sat there in stunned silence. It appeared that Tears for Fears had spent four years turning themselves into the Beatles. What was all this about sunflowers? Where were the synths? Where was that trademark glumness I was so fond of? It was a lot to take in in one sitting. Thankfully I always taped The Chart Show, so I was able to rewind it and play it over and over again until I’d acclimatised myself to this new reality and realised that it was completely effing brilliant. Even now the opening few seconds give me the shivers.

The album was a slightly different matter. I have to confess it took me nearly as long to get into it as it did the band to make it. Everything seemed to go on for at least twice the pop song’s optimum length, much of it crawled along at a snail’s pace, it kept going all jazzy, and quite frankly there wasn’t enough Curt for my liking. I’d loved the second single, Woman in Chains (and fell a bit in love with Oleta Adams as a result) but was a bit indifferent to the third, Advice for the Young at Heart. For the longest time I didn’t even know there was a fourth single, which shows you how much effort Fontana put into promoting it. Famous Last Words was the last track on the album, but I’m not sure I ever got as far as that point in 1989. However, by the early 90s my parents had moved to a house where I got an attic bedroom, and during the university holidays I’d lie in bed at night listening to albums on headphones, looking up through the skylight having big thoughts, like what a great moody scene this would make in the eventual movie of my life. This was how I eventually came to appreciate The Seeds of Love, and discover what an amazing single Famous Last Words was.

Yes, this was what I had been missing all along – the song that perfectly blends new Tears for Fears with old. For its first two minutes and twenty three seconds it’s astonishingly, beautifully still (enough to ensure it never stood a chance at radio), just a little synth (yes!), piano, strings, Roland’s voice and a tiny bit of trumpet. Lying in a warm bed with moonlight shining down on me, it was quite the Moment. But then at 2:24 it suddenly expands – the tempo revs up, Roland starts howling as only he can and the whole thing becomes a glorious explosion of sadness. By the time he sings “Hand in hand we’ll do and die / Listening to the band that made us cry”, Tears for Fears are the band that made me cry and I’m covered head to foot in goosebumps. This whole section barely lasts a minute (perhaps one of the few times during the making of the album that someone said ‘that’s it!’) and the song returns to quietness for its run-out. The entire thing clocks in at 4:27, it’s the shortest song on the album and is, for me, easily its best.

For a while it looked like The Seeds of Love had completely wrecked for Tears for Fears. It didn’t (though it had a jolly good try), but if Famous Last Words had ended up being the band’s full stop, I think it would have been pop’s most beautiful goodbye ever. 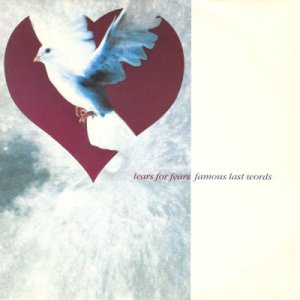 Who could sing this today and have a hit? I think a Mary J Blige version of this would be exquisite.