Surely, for most pop stars the only fate worse than being a bone fide ‘one hit wonder’ is being mistakenly branded as one, despite having a row of gold and platinum discs lining the walls of your record company’s offices which clearly states otherwise.

Remember Berlin? In the US, the band had spent the best part of a decade building their reputation as a slightly pervy, but still fairly credible new wave/rock band – scoring a couple of top 30 albums and registering their first sizeable hit on the US Billboard chart with the Giorgio Moroder produced No More Words – before the (soon to be) ubiquitous Take My Breath Away soared all the way to no.1 on both sides of the Atlantic towards the tail end of 1986. While the dramatic upswing in exposure (and sales) which went hand-in-hand with appearing on the tie-in soundtrack for a hit movie (with a $350 million domestic gross) might have helped boost the band’s profile in the US and turned Take My Breath Away into one of the defining songs of the decade, it did little for the rest of their career in the UK.

While they did manage to have one more top 40 hit in the UK – You Don’t Know, the follow-up to their mega-hit – that song took seven weeks to climb to its no.39 peak, while Take My Breath Away was still firmly entrenched inside the UK top 20. To add insult to injury, their status as UK ‘one hit wonders’ was cemented forever by the fact that their only other top 10 placing was with the same song. When Top Gun had its first terrestrial TV broadcast  in 1990, Take My Breath Away was re-released and climbed all the way back to no.3 on the UK singles chart.

Now, take pity on Australia’s Icehouse. On their home turf, Iva Davies, their front-man and creative driving force, guided the group’s ever-changing line up through a long and distinguished career, reaching the Australian top 10 with their first six albums and enjoying more than a dozen top 20 singles. Here, Icehouse entered the UK top 20 only once – with Hey Little Girl in 1983 – and, while they did manage to make one more, albeit fleeting, appearance inside the UK top 40 – Crazy spent one week at no.38 in March 1988- they were effectively written-off as merely being some sort of Bowie/Roxy Music /Japan tribute act.

Icehouse’s erroneous branding as ‘one hit wonders’ is easily dismissed once you put their prolonged success in their own country into perspective. In 2004, more than two decades after the release of the self-titled debut, a recently recorded Icehouse track – a cover version of David Bowie’s Heroes – was chosen as the theme song to Australian TV’s coverage of the Athens Olympics. Now, in my book, that’s equivalent to Danny Boyle choosing to build the London 2012 opening ceremony around a performance by Althea & Donna.

Icehouse’s breakthrough came with their second album, Primitive Man, which was home to the aforementioned worldwide hit Hey Little Girl. Released in late 1982, it proved to be  an instant success in their homeland. Peaking at no.3 in Australia (and climbing all the way to no.1 in New Zealand), the album is a surprisingly bold and confident collection of songs. Yes, there are obvious comparisons to the work of Bowie, Ferry and Sylvian, but this was so much more than mere pastiche or parody.

Primitive Man arrived here the following Spring, pre-dating a-ha’s triple platinum debut Hunting High And Low by a good couple of years, and like that album it’s packed with a brace of commercial, radio-friendly pop hits. Unfortunately, it was fairly clear from the outset that Iva and his band-mates did not possess the same Smash Hits centre-spread appeal as Morten, Pål and Magne in their tight white tee and denim-clad prime. But it’s easy to speculate that, with the right ‘look’ and more MTV exposure, Icehouse could have easily enjoyed a similarly meteoritic rise as the Norwegian trio which would have put them onto a far more stable commercial path, internationally speaking, over the course of their next few albums.

Chief amongst the hits-that-never-were from Primitive Man – which was actually re-titled Love In Motion for the UK market – is the album’s opening track, Great Southern Land. It was a song which proved to be an important milestone for the band, not only delivering their first domestic top 5 single, but also acting as the perfect blueprint for much of Iva Davies’ and Icehouse’s future output. A mesmerising slice of epic, synth-pop/rock, it exudes much of the same easy swagger that turned INXS’s Kick into a global phenomenon in 1987 and displays a similar flair for atmospheric soundscapes and majestic, wind-swept drama which would soon become part of a-ha’s signature sound.

While Icehouse remained something of an enigma outside their Australian homeland, they did score a couple of sizeable hits in the US and built an extremely enthusiastic, but decidedly cultish, worldwide following. But it’s safe to say, as far as scoring hits in the 80s, nothing served you better than a pretty face or a tight pair of jeans. Just ask two of the UK’s most prolific 80’s hit-makers, Shakin’ Stevens and Status Quo. The Quo, in what might be viewed as Phase II of their (seemingly never-ending) career, scored 20 UK top 40 hits between October 1980 and December 1989, while Shaky is officially recognised as spending more weeks on the UK singles chart than any other artist in the 1980s – 254 to be exact*. 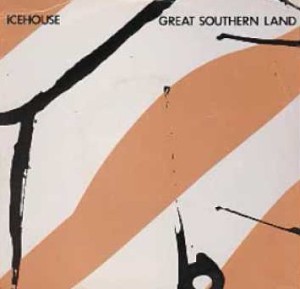 Who could sing this today and have a hit? – With its lyrical content so unquestionably Antipodean, I reckon that this might be a good song for Sia’s inevitable covers album – unless she’s planning to simply reclaim all the songs she’s given away to other artists over the last decade or so. *immediately tries to place pre-order for unrecorded Sia covers album on Amazon*