Chaka Khan – Love of a Lifetime

What a curious time the mid-eighties were – especially if you happened to be an elusive chanteuse of the R&B variety. Let’s say you’ve just ‘crossed over’ to the pop charts – possibly helped by the rise of MTV (once Michael Jackson had kicked the doors in, anyway) – and are pondering your next career move. You’d probably like to continue “living your truth”, as we are obliged to say now, but unfortunately you are not the only one pondering that move – lots of men in suits on the top floor of fancy office blocks in LA are too. And what they have decided is that you will go full on pop for your next release because that will attract the widest possible audience and make the most money. This is fairly typical for those with an eye on a fast buck, but if history has taught me one thing it’s that alienating your original audience is never that good in the long run. Consider Whitney Houston’s second album, Whitney. Yes, a worldwide commercial smash that elevated her to pop superstardom. But where her first album yielded three US R&B chart no.1’s, the follow up produced precisely none. 1990’s I’m Your Baby Tonight was partially an attempt to rectify that, and it proved that, to a degree, you can go home again – but you may find the key isn’t under the mat where you left it.

Similar things were going on in the Chaka Khan camp in 1986 following the global smash of I Feel For You and its accompanying album. Chaka, of course, was not new in the sense that Whitney was, having had eleven top 10 R&B hits with Rufus and a further five as a solo artist. But when I Feel For You granted her a first visit to the Hot 100’s upper reaches (peaking at no.3 in 1984), you can bet the dollar signs started flashing in the eyes of record company types, and the interference began. It’s immediately obvious from the sleeve of the Destiny album – a close up face shot, half of it obscured, shot from above – it all smacks of some executive wondering aloud if Chaka couldn’t somehow be made to look a little thinner. Exactly the same thing happened later with Kim Wilde (on the covers of both Close and Love Moves), and it makes my blood boil. Of course the music got a similar makeover and the end result was a product designed to be all things to be all people (including Phil Collins fans). Destiny was a hybrid of pop, rock, rap and R&B (just), but with crushing predictability it was popular with almost nobody. However, that doesn’t mean it isn’t any good. I actually think it’s really good.

In some ways, Destiny sounds like it was compiled from a list of songs written for the end credits of vacuous 80s movies, and to me that is never not going to be a great thing. Yes,  it’s bit of an oddity in the Chaka Khan canon but it does have several moments of amazingness – notably Tight Fit (the slinky second single, Earth to Mickey (Chaka raps! And Nicki Minaj was clearly paying attention!), The Other Side of the World (a ballad worthy of sitting next to Through the Fire, written by – gasp! – B.A. Robertson and Mike Rutherford from out of Genesis) and of course the lead single – the endless delight that is Love of a Lifetime.

If ever there was a song that screamed ‘hey! there’s a party happening right now and you’re invited!’ it’s this one. Those opening bars are perfect for checking your hair in the mirror and blowing yourself a kiss before darting out for a guaranteed good time. And if you’re thinking ‘gosh, this sounds exactly like Scritti Politti, only more excitable than I’ve ever heard them’ then you are spot on. Love of a Lifetime was written by the band’s Green Gartside and David Gamson, and co-produced by Gartside and Arif Mardin. And of course it’s Mardin who joins the dots between the Chaka and Scritti, having produced both. You can also hear Green on backing vocals – yes, like Neil Tennant when he’s producing for others, he just can’t resist including himself. Works a treat though.

Anyway – despite sounding like Scritti Politti on uppers, there’s only one star of the show here and it’s Chaka Khan – and if there’s one thing that Love of a Lifetime proves, it’s that you can chuck any style of music at her and she will make it sound a) incredible and b) like she was born to do it. While the production is innocently poppy, very clean-sounding and curiously bass-less (very 1986, that), her vocal is almost the exact opposite, injecting the song with the passion it would otherwise lack. When she first sings “we got the love of a lifetime” with such joy it does rather make you stop and wonder if you’ve ever felt that way about another person. Her vocal here is, I think, one of her very best – by the time we get to the “Keep up the good love together / we can hold it boy / and never let it go” bit at the halfway point, she’s soaring so high you practically need binoculars. I sometimes wonder what happened to Sandy and Danny in Grease after their car heads for the clouds at the end, and I think it might just be this song.

Love of a Lifetime demonstrated quite emphatically that when Chaka plays pop, Chaka wins. But what should have been a smash turned out to be a flop just about everywhere – no.53 on the Hot 100, no.21 on the R&B chart and no.52 in the UK. Its best showing was one the US Dance chart, where it made no.11. Why did it fail? My best guess is that it was too much of a change for her established fanbase, though in the UK I’m sure the promotion of it wasn’t up to scratch. Oddly, it would take a remix album – 1989’s Life is a Dance – to restore Chaka Khan to the top 10 of the UK singles chart, with reswizzed versions of I’m Every Woman and Ain’t Nobody reaching no.8 and no.6 respectively. As a band-aid it worked very well, but I think it also had the effect of rendering Chaka an echo from an era – she would never again visit the top 40 with a solo record. 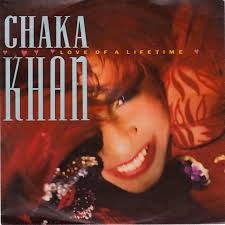 Who could sing this today and have a hit? I’m not sure anyone has the range to be honest with you. Bey?