Cathy Dennis – That is Why You Love Me 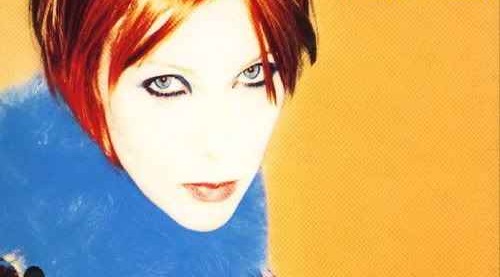 How do you solve a problem like Madonna? Or Kylie…or Britney…or any other pop princess who might be straining to catch a glimpse of her Imperial Phase in the rear view mirror as it disappears into the distance. It’s almost understandable that these ‘Ladies of a Certain Age’, after years (and sometimes decades) of rejuvenating their sound and re-inventing themselves, might have a problem with simply shutting up shop and handing over the reins to younger, (some might say) more relevant, pop pretenders. But, if I was Madonna and a bunch of pop wannabes – be it Katy Perry, Jessie J or Ariana Grande – were making a challenge for my crown, they’d have to fight me for it. Nothing short of them forcibly yanking it from the vice-like, clenched fists of my cold dead hands would convince me to give it up.

All of this unsightly grappling for pop supremacy inevitably leads to (some might say) age-inappropriate behaviour and a few awkward moments. Be it Madonna’s cloak-clad tumble at The Brits in 2015 – an incident that, with crushing predictability, swiftly became a magnet for lazy articles mentioning Stannah Stairlifts, ‘pensioners health plans’ or help with ‘accidents in the workplace that were not your fault’ – or a sweaty Kylie bouncing around on a space hopper in a lycra one-piece for her Sexercise video – something Olivia Newton John had enough sense to avoid in the 80s when that sort of behaviour was almost acceptable. And, while the eventual $700 million plus gross of the 2011 ‘Femme Fatale’ Tour might seem to justify Britney putting down that enormous bag of Cheetos, hauling herself off the sofa and out from under her Slanket, there’s definitely no excuse for the travesty that ensued. However entertaining it all was, I’ve seen less miming at a Marcel Marceau convention and if the intention was to position her as the Florence Foster Jenkins of dance, then…job done.

Whilst we fiercely defend a pop star’s right to do whatever the hell they want, there is another way.

Before her much documented rise to dominance as a songwriter in the early 2000s – Can’t Get You Out of My Head, Toxic and I Kissed A Girl to name but three worldwide chart-toppers – Our Cathy gave it a decent whirl at being a Pop Star herself.

Right from the outset, it was clear Cathy was a little uncomfortable being thrust into the spotlight. She rarely appeared as ‘herself’ on television, preferring to remain safely encased in the perfect, controllable, artificial glamour bubble of the pop video or surrounded by an army of dancers, protected by the impenetrable fortress that is the tightly synchronised dance routine. Cathy’s few forays into non-performance telly didn’t always go smoothly – a toe-curling appearance on Channel 5’s late 90’s daytime chat-show, 5’s Company went horribly wrong when the well-meaning host introduced Cathy as ‘a simple girl from Norwich’. It all turned a bit frosty and ‘huffy’ from there. As her fame grew, Our Cathy only seemed to get more uncomfortable, resulting in the sort of erratic and eccentric behaviour that made you wonder if she’d been media trained by Paula Yates, Grace Jones and Rod Hull’s Emu.

Cathy was much better when she disappeared inside whichever pop-star persona best suited her latest musical project. Her debut album, 1991’s Move to This, presented her as the ultimate pop-dance party girl, all primary colours with a Louise Brooks bob, while the 1993 follow-up, Into The Skyline, saw Cathy sporting a slightly more sophisticated, Old Hollywood glamour look – let’s ignore a brief foray into pink mohair for the Falling single.

When it came to Am I The Kinda Girl?, 1997’s belated follow-up, Cathy had created a character who seemed to wholly personify the mix of Cool Britannia and swinging sixties London evoked by the retro sound of the album’s key songs. Cathy’s alter-ego, part Liver Bird, part Mary Tyler Moore’s Mary Richards, was confident, freewheeling and independent, sassy with the merest hint of vulnerability. She was Twiggy, Christine Keeler and Rita Tushingham all rolled into one.

More than any of her previous albums, Am I The Kind Of Girl? is an entirely coherent collection of songs. Stylistically connected, with an overarching theme, each song seems to be told from the point of view of just one character, forming a loose, but compelling, narrative. In my book, that’s the foundation for a West End worthy musical. While I’m the first to admit that the world probably isn’t quite ready for a Cathy Dennis juke box musical, with a few tweaks, I suspect these songs could easily be re-tooled as a credible account of the lives of the women involved in the Profumo scandal – Christine Keeler and Mandy Rice-Davies – and hang together better than Stephen Ward, Andrew Lloyd Webber’s recent (less than stellar) stab at the same subject matter.

Intentionally or not, with Am I The Kinda Girl?, Cathy had created something which was as much a Britpop concept album as Blur’s Parklife, but with its unapologetically Girl Power slant, it managed to turn the predominately male dominated guitar-pop formula completely on its head. With every song depicting a world viewed entirely from a female perspective, it was an unexpected twist on the genre and it undoubtedly sent a cold shiver of dread through the corridors of Cathy’s record label, Polydor.

When first single, West End Pad, stalled at no.25 in August 1996, it must have come as something of a shock, especially considering, in the cutthroat world of pop at that time, anything outside the top 10 was considered a flop. Unsurprisingly, the release of the album was delayed until the record company were happy they had a hit single to promote. Thus, Am I The Kinda Girl? was eventually released in March the following year, after – sound the ‘Emergency Cover Version’ klaxon – Cathy’s version of Waterloo Sunset had peaked at no.11 on the UK chart a few weeks earlier. When the third single, When Dreams Turn To Dust, stopped at no.43 at the end of June, the whole project ground to a halt.

While the whole concept may have been a hard sell, considering the public’s long established acceptance of Cathy fronting pop/dance hits like Touch Me (All Night Long) and Just Another Dream, it’s not hard to imagine the bulk of the songs from Am I the Kinda Girl? being gifted to other artists. Most obviously, with their Britpop-lite affectations and Guy Chambers co-writes, all eleven songs could have been sold as a job lot to Robbie Williams. With only the slightest of gender realignment, these songs would sit neatly alongside Angels and Let Me Entertain You to form a much more cohesive (and infinitely more listenable) version of Life Thru A Lens, Williams’ probably-would-have-flopped-if-it-wasn’t-for-Angels debut album.

In reality, disappearing after only one week inside the UK top 100 album Chart and gaining an undeserved reputation as a bit of a dud, Am I The Kinda Girl? was, by far, Cathy’s least successful, but ironically probably her most accomplished, set of songs. It’s a shame, as the album’s poor performance means some of Cathy’s best work remains largely undiscovered. Chief amongst several single-worthy tracks are The Date, a gorgeous summery ballad, co-written with Ray Davies, and, best of all, That Is Why You Love Me, a saucy romp of a song which was presumable earmarked as a single at some point – there’s a YouTube clip of Cathy performing the song before the album was released. More than any other on the album, this song acts as the thematic and tonal jump-off point for the entire record, as well as perfectly introducing Cathy’s incorrigibly groovy Am I The Kinda Girl? alter-ego. Powered by a relentless back beat and lyrically witty and self-effacing, That Is Why You Love Me is filled with knowing winks and has its tongue firmly wedged in its cheek. Consisting of little more than a list of progressively more outlandish, quirky and sometimes downright cruel behaviour which forms the foundation of the song’s central relationship, it’s risqué, bordering on camp and with one eyebrow permanently arched – now if that doesn’t sound like the blueprint for the rest of Robbie Williams’ twenty year career, I don’t know what does.

While giving away a whole album’s worth of songs may be taking the idea of pop star generosity too far, Cathy soon realised she was never going to be troubling the top 10 as a solo artist anytime soon. There’s something to be said for Cathy’s practical acceptance that her talents might be better used elsewhere. Inspiring and empowering the next generation must have its own rewards and, sometimes, passing the torch graciously is a sensible thing to do. Now if only she’d sent an ‘all users’ memo ‘round to the ‘Pop Princesses Over 30’ email group, then we might have avoided the recent, undeniably below par, Rebel Heart. Personally, I’d rather see Madonna’s name popping up as a co-writer or producer on albums by new and emerging artists like Carly Rae Jepsen, Ladyhawke or Shura. It might just be the musical equivalent of an ascension to Mount Olympus, where she could guide the careers of her pop progeny from on high. Rather like Cathy Dennis does now. 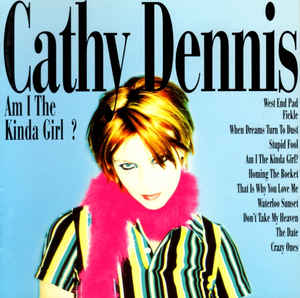 Entered chart:  was not released

Who could sing this today and have a hit? – Well, aside from Robbie Williams, I think this might neatly help usher in Katy Perry’s True Blue phase – which would then hopefully lead to a Like A Prayer phase. FYI – I’m happy if we skip the Erotica phase and slide straight into Bedtime Stories.

1990s, British Pop, Female Solo, Pop music
1997, Am I the Kind of Girl?, Cathy Dennis, Into the Popvoid, Pop, Stewart Allan, That is Why You Love Me, Toxic, Waterloo Sunset, West End Pad