Today we’re looking at pompous pop, which is a funny old thing isn’t it? Its heyday was probably the late 1980s, when a lot of of music came accompanied by a message. We can, of course, blame Live Aid for this, which sparked years of pop stars having to visibly care about something, be it homelessness (Phil Collins), socio-political issues with a bit of religion chucked in (U2) or world peace (Big Country). More often than not the message itself was rather oblique – though of course Neil Tennant, in Chris Heath’s marvellous book Literally (which is the textbook for my eventual Pop 101 class), pointed out quite accurately that most of the time “the message is that they’re promoting a new album. But you’re not supposed to say that, or you’re accused of being cynical.”

I say all this like I don’t actually like pompous pop. I do. It performs a vital role, even if that role is soundtracking one of those “I Remember…” documentaries. Pompous pop is very good at marking moments in time. What is the end of the Cold War without Wind of Change by the Scorpions? Just a bit of light masonry.

Of course not all pompous pop came with a message attached. Sometimes your upcoming pop star quite fancied being taken seriously but wasn’t really sure which cause to get behind, so they just grew their hair instead and practiced looking really moody, often in a hat. The luckier ones in this category included Then Jerico, who arrived in 1987 in a blaze of monochrome seriousness without actually saying anything very important. I think their success might just have had an impact on the career of today’s subject, who possessed a similar (non) ethos and were, if anything, even moodier – yes, it’s the long forgotten When in Rome.

From our distant viewpoint it’s easy to have a laugh at When In Rome, who come across as a bunch of incredibly po-faced doorway-leaners and hair-tossers who’ve been given the run of a stately home for a weekend. But we must remember that most likely none of this was their fault – they were just doing what they were told by the record company and a director who got a bit carried away. The Promise is, therefore, best enjoyed without the video. Taken on its own, we can enjoy its backward leaning, early New Order-ish elements in tandem with its forward looking Ten Sharp-ish bits and appreciate that it is in fact rather a cracking, if very serious sounding, pop song which has the quite rare knack of making you feel all nostalgic for something you can’t quite put your finger on. Like If You Leave by OMD or Time After Time by Cyndi Lauper it’s one of those ‘prom night’ records that sound best in an echoey hall with lots of furtive snogging going on.

With this sound, America, not surprisingly, took to The Promise more readily than we did in the UK, and it reached no.11 on the Billboard Hot 100 in 1988, compared to a no.58 British peak the following January. I daresay the band were rather excited by this development and immediately began viewing properties in the Hollywood hills, but when the tinny and slightly rubbish follow up Heaven Knows (which features one of the worst raps ever) peaked at no.95 that was pretty much it for them. But not quite – The Promise showed up again in 2004 at the end of Napoleon Dynamite, and that seems to have been enough to prompt something of a mini revival, with two versions of the group doing the rounds for a while, one of which was called, with pleasing meaninglessness, When In Rome UK.

Pop is a lot less pompous these days, don’t you think? If anyone is peddling a message it’s usually the one that Neil Tennant observed so sagely back in 1989. At least it’s honest. 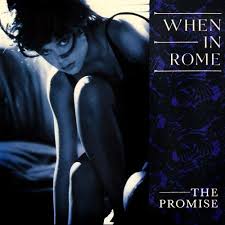 Who could sing this today and have a hit? Ripe for sampling, I’d say, by the world’s most pompous pop star. Kanye?