Where do you stand with EPs vis-à-vis chart positions? Do you count every track on them as being hits of equal magnitude? Of course you don’t, that would be ridiculous – and it’s this viewpoint that informs this year’s first festive inclusion: She Won’t Be Home by Erasure. It was of course part of 1988’s Crackers International EP (a no.2 smash hit), but everyone bought that for Stop! really, didn’t they?

I bought Crackers International (12 inch) on a family Christmas shopping trip to Edinburgh in December 1988, where I also purchased a tasteful (no really) black cat figurine that my mother still has on display to this day, so I think we can call that a successful outing. It was one of those wonderfully dark, freezing cold Scottish days, we’d parked miles away to avoid having to pay and there was snow on the ground as we trudged back to the car. I’ve never felt more Christmassy in my life, and this song – which I instantly adored upon first listen and have played every year since at least fifty times, is now inextricably linked with that lovely day out.

She Won’t Be Home finds Erasure slap bang in the middle of their Imperial Phase, which by my reckoning ran from Ship of Fools through to Love to Hate You (note that the Abba-esque EP, their sole no.1, falls outside this period, but feel free to argue the point). Imperial phases are a funny thing, aren’t they? Broadly speaking, the term refers to a (generally quite brief) period of time in which everything you do is successful and every record you make is brilliant – but the nature of pop means that even if you continue to be just as brilliant, the success won’t last. I’m not sure it even exists as a concept any more, but that’s probably a discussion for another time.

When it comes to Crackers International, Erasure’s cup was overflowing. All four tracks on it could have been standalone singles in their own right, and in this period they would all have been big hits – but when you’re in your IP you can chuck them all out on one record because you have plenty more where that came from. Of course this is marvellous for the fans, but it does rather mean that my favourite Erasure song of all time is buried as track 2 on side 2 and thus never got to fulfil its true destiny as the last song on the Christmas edition of Top of the Pops, when streamers appear from the ceiling and everyone feels amazing for three minutes.

She Won’t Be Home is of course a perfect example of a very specific genre: the Christmas song which is so exquisitely sad it makes you forget how stressful being at home for the holidays can actually be, and which compels you to race there immediately, laden with gifts and short-lived good intentions. I do love a jolly festive tune, but it’s these ones that are front loaded on my annual playlist – see also Fairytale of New York, the theme from The Box of Delights, Tracey Thorn’s Joy and She Came Home for Christmas by Mew.

Of the many things I love about She Won’t Be Home, what I particularly adore is how it starts out in a Salvation Army band style with that lovely lonely horn – that in itself is enough to get me on to the National Rail Enquiries booking page. Of course this intro sort of primes you for a ballad but then it fizzes to life and turns into a proper up-tempo classic Erasure number with extra special twinkly bits! Amazing.

The second verse has always held a special fascination for me because I swear there is a bit in it that wasn’t there the first time I listened to it. Just when Andy sings “she phones her mum” you can hear a muffled voice saying something, and to me it sounds exactly like my mum saying “Rowan?”, which was the name of our Siamese cat. At the time I wondered if somehow – god knows how – it had become etched into my copy of the record, but when I went round to my best friend Sam’s house to check his, there it was. Yet still there is 1% of me that thinks my mum is on the record, which naturally only makes me love it that bit more.

The other things I love about this song are as follows: Andy’s vocal, the backing singers, the horn coming back in during the middle eight and the gorgeous noodly little refrain that pops up right at the end and which makes you want to put it on again straight away just to get back to it. This, for me, is the perfect Christmas record and it’s a source of some distress to me that it isn’t on Now That’s What I Call Christmas and wasn’t the lead track on the EP. I can’t argue that Stop! isn’t a massive stomper but really it could have been a single at any time. She Won’t Be Home could have, and should have been issued in its own right. Of course it wouldn’t have reached no.1 thanks to Sir Clifford of Richard and Kylie and Jason, but that’s pop for you isn’t it? 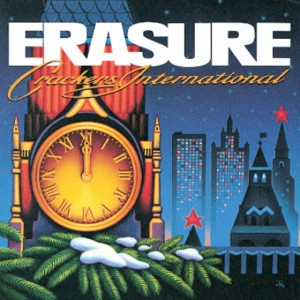 Entered chart: Pedants could argue that officially this is a no.2 hit, but I’m not having it.

Who could sing this today and have a hit? I always thought Kylie could do a lovely version of this, and yet it is the one Christmas song she hasn’t covered. Perhaps on the next edition of the album, eh?