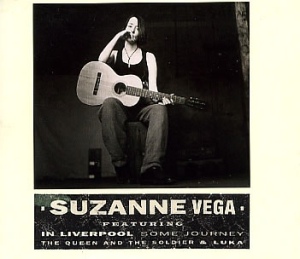 In the late summer of 1992 I had just entered my third year at Glasgow University studying English Literature and Medieval History – boy have those come in handy – and on my way home from lectures on a Monday I would always nip into Woolworths on Byres Road to see what the week’s new releases were. I loved the ritual of scouring the singles wall, hoping to find something I hadn’t read about in Smash Hits. One week, nestling near the bottom was an exquisitely designed CD by Suzanne Vega entitled In Liverpool. Breaking my cardinal rule of not buying something without hearing it first, I trotted up to the counter and handed over my £1.99.

In Liverpool proved to be a revelation. Beginning quietly – possibly so as not to scare long-time fans – it was a gentle introduction to the musculature that was being added to Suzanne’s sound. Home to one of her most beautiful melodies, the realisation that something different is happening occurs at 2:07 and the end of the second chorus – a beefy, faintly menacing guitar line storms in, rocking the boat. Maybe the title makes me think of the Albert Docks, but I always imagine this song taking place on a tugboat in choppy waters as the Royal Liver Building comes into view.

I love it when pop stars play with your expectations – and with the accompanying album 99.9F° Suzanne Vega threw every single expectation right out of Tom’s Diner‘s window  – almost as if she’d moved from Greenwich Village to a noisy industrial town. The album was fast, loud and aggressive – not words that had ever really been associated with Suzanne before. Subsequent singles 99.9F°, Blood Makes Noise and When Heroes Go Down hammered the point home even further – if you thought she was all about gypsies, queens and soldiers then think again.

99.9F° garnered Suzanne possibly the best reviews of her career, and remains her only release to yield four UK top 75 hits. While it didn’t exactly storm the charts it did become a slow-burning success, and remains one of my top 10 favourite albums of all time. Once the transformation had begun, Suzanne pushed on even further, relocating from that banging metropolis to somewhere dusty on the outskirts of town for 1996’s smoother and spookier Nine Objects of Desire. She remains as interesting as ever on last year’s Tales From the Realm of the Queen of Pentacles, so if you’ve not checked in for a while now might be the time to do it.

Who could sing this today and have a hit? I reckon Haim could do a good job.