We exist in an odd time in the pop industry.

In a post-recession world, money talks. Decisions at [insert record company here] are made with one eye on the bottom line rather than with artistic consideration. Risk is discouraged, so pitting their Hot New Thing against an established star within the same market niche is a potentially expensive mistake.

A steady, reliable stream of income from the same pen of forced-down-our-throats artists is preferable to taking a punt on a possible star. Consequently we have Ed Sheeran, Rita Ora, Calvin Harris, Sam Smith, Ellie Goulding. Next off the Ever-Present Production Line are seemingly Years & Years.

This safety first logic is also why an unprecedented percentage of current chart hits are ‘collabs’ – teaming up budding popstars with reliable faves to see which new faces are adopted by the public. This path is currently being trodden by Ella Henderson, who had one and a half proper hits from her debut album before subsequent releases failed to muster much interest. She can currently be found lending her talents to Sigma’s latest top ten troubler, Glitterball.

One such artist to have navigated their way through the Featured Artist assault course is Jess Glynne, who has gifted her gravelly vocals to various big dance hits and – after one precursor single last year – has recently, finally, had the training wheels taken off for a full solo pop career rollout.

Jess’s success is Becky Hill’s loss, as Jess can now be reliably called upon to sell bucketloads while Becky stands alongside Tanika and Leah McFall among pop’s ladies in waiting. Becky’s vocals helped propel Oliver Heldens’s Gecko (Overdrive) to number one but so far her label haven’t chanced valuable marketing budget to really push her solid, understatedly brilliant solo material (Becky and Jess are both signed to labels within the Warner Music Group, so we are left to speculate whether or not they are allowed to go toe-to-toe in the charts).

A stint on the first series of The Voice UK, when she reached the semi-finals, has been quietly brushed under the carpet but earned her a place as a guest vocalist on Rudimental’s first album (Powerless) and an uncredited role on Wilkinson’s 2013 hit, Afterglow. Dig around on YouTube to see her rendition of Corinne Bailey Rae’s  Like a Star for a demonstration of her supreme controlled power (it’s arguably superior to the original).

Losing was the first single to be given a full release, and it’s a gem that was produced by MNEK, previously responsible for The Saturdays’ All Fired Up and Misha B’s Home Run.

Becky’s vocals are soulful, rich and instantly familiar, although the sound is perhaps just too different to the floor fillers she’s become recognised for to carry the momentum forward – or indeed make it onto the Radio 1 playlists.

Happily it seems the label has faith, lending her and her vocals to French producer Watermät’s new single All My Love, which seems destined to be a sizeable hit.

We live in hope – it deserves to be huge. As does Becky. 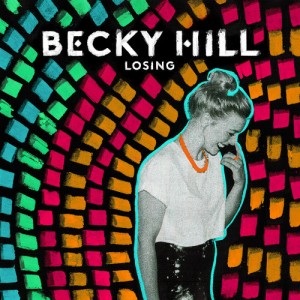 Who could sing this today and have a hit? Ella bloody Henderson

Luke is a 36-year-old copywriter who lives and loves - and loves to live - in Manchester. He sews, cooks and obsesses about pop music. And his waistline. View all posts by Luke Geoffrey