I often wonder what period in history I’d visit if I had a time machine, and while there are many thrilling pop moments to choose from, I’m pretty certain I’d plump for London in the summer of 1986 on the day that Cyndi Lauper filmed the video for Change of Heart. Imagine it – you’re ambling around Trafalgar Square and instead of finding several levitating Yodas and a few scythe-bearing Deaths (or the era-appropriate equivalent) you encounter an excitable pop star and her full band performing a brand new track, and just by virtue of standing there gawping you inadvertently end up in the video! I think that would be a strong contender for Best Day Ever, don’t you? You’d certainly have gone home with the feeling that it was going to be a huge hit when it came out, because you’d also have had a sneak preview of possibly the most exciting union in all of pop – that of Cyndi Lauper and the Bangles.

Because I don’t have a time machine, I had to find out about this union along with everyone else, when I played my cassette of True Colors for the first time. Unless you’re the sort of person who sits down and reads album credits before listening, it would have come as a gigantic, thrilling and entirely welcome surprise. Placing it as the first track, however, meant that it took me ages to get through the whole thing because I just kept playing it over and over again – with the slightly odd result that True Colors remains to this day the Cyndi album I’m least familiar with.

Of course team-ups of amazing rival pop stars almost invariably end up being considerably less than the sum of their parts – see especially Scream and When You Believe, neither of which really do justice to the talent involved – but Change of Heart is literally everything you would expect it to be, I suspect because neither party was overly concerned about trying to out-do the other, except possibly in the outrageous hair stakes. Susanna, Michael, Debbi and Vicki’s harmonies (never beaten in pop if you ask me) are the ultimate soft landing for all of Cyndi’s sharp note endings (“beat-uh!“), and they combine to turn what could be quite an abrasive, shouty record into the sort of song you can bury yourself in, like one of those giant ball pits for grown-ups. It’s both enormously exciting and overwhelmingly comforting at the same time, and that’s entirely down to the vocals – Cyndi bringing the angst and doubt and yearning, desperately wondering if her true love is ever going to see sense, while the Bangles, doing their Greek/Californian chorus thing that they do so well, provide the same sort of reassurance that your pals do down the pub even if they’re not really that sure you’re right – it is glorious.

Technically of course, the Bangles are just on backing vocals, which perhaps explains why they don’t show up in the video (I like to imagine they wanted to but were stuck on the Central line), but if I’d been in charge of Epic Records in the UK I’d have made damn sure there was at least a “FEATURING THE BANGLES” sticker slapped on the front of the 7 inch. As soon as you clock that it’s them, you spend the rest of the record waiting for them to have their big Bangle moment, and when it comes – at 3:46 with that heavenly* “ooh-ooh-ooh-ooh” bit, it’s truly exquisite – especially when Cyndi joins them, perfectly in harmony, for that last refrain. A little more publicity about this might have given it a better chance in the charts, where it lingered for ages but never climbed higher than no.67 (though of course it was a no.3 smash in America). In thirty years I’ve never really been able to satisfactorily explain it (other than with a vague half-hearted oh-it-must-have-got-lost-in-the-Christmas-rush type of statement), making the failure of Change of Heart one of the great Unsolved Mysteries of Pop. 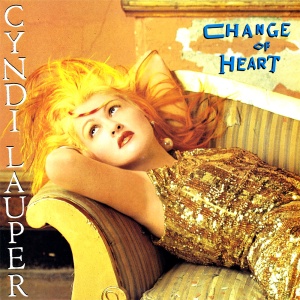 Who could sing this today and have a hit? Saara Aalto and Little Mix. You know it makes sense.

*I would like it on record that I want the Bangles to welcome me at the pearly gates singing either this or Hazy Shade of Winter. I’d bound right through, leaving all thoughts of the mortal world behind (after stopping to get autographs, obviously).