The Blue Nile – Headlights on the Parade

Do you ever hear a song for the first time and find yourself just completely overcome by it? One that puts you in that odd space between utter happiness and a kind of indefinable sadness? I do. It’s quite a strange feeling really, and you never quite know which record is going to do it. With me, it doesn’t even have to be a slow song – Toy Boy by Sinitta is one of them. Yes, I’ll hurtle to the dancefloor of any venue brave enough to play it these days, but I’ll always end up on the verge of crying at some point. I think it’s the chords. God knows it’s not the lyrics.

In 1989 I was seventeen and on the cusp of the biggest change so far in my life – it was my last full year at home before heading off to Glasgow to start university. A couple of years prior to this we’d moved out of town to the countryside, to a house called Greenbank on a farm called Whitespottes near the village of Closeburn. I thought I’d hate it, but it turned out I loved it. I developed a huge fondness for taking the dogs – and occasionally one or two of the cats – out on walks up big hills and through dense woods, feeling brilliantly alone. Of course I blocked out the sounds of nature with music, lip-syncing as I traipsed about and behaving as if I were part of a particularly atmospheric video shoot. I did this to an Enya soundtrack rather a lot (and as it turns out, she’s quite hard to lip-sync to), but it wasn’t until I bought Hats by The Blue Nile (on cassette) and took it out for a walk that I discovered a song which was the perfect one for this activity.

There was a big hill behind our house, and it took about twenty minutes at a brisk pace to get to the top of it. By by the time I hauled myself up there, Headlights on the Parade was about halfway through. I had a 360 degree view of nothing but glorious Scottish countryside, one of the most beautiful pieces of music I’d ever heard in my ears and no-one around to worry about seeing me having a good cry. I hope I’ll have a few more moments like that. It’s a long time since I’ve been up a hill.

Honestly, what a song. I instantly adored it and still do, twenty seven years on. It lasts for a generous six minutes and seventeen seconds but somehow that doesn’t seem like enough – one of the first things I thought when I heard it was ‘I’d love an extended version’. But what really struck me was the amount of feeling going on in it. I’m as guilty as the next man of playing up to the stereotype of the Scottish person as impassive robot, but every so often one of us will come along with a line like “Headlights on the parade / Light up the way / I love you”, sing it like it’s the last thing they will ever say, and completely blow our cover. Lord knows I didn’t know the first thing about love at the time, but that didn’t matter. If it felt like this huge blend of a gentle but definitely-going-somewhere pace, rising synth lines and piano, it was going to be alright by me.

Some months later I headed off to Glasgow, but Headlights on the Parade came with me. It was all very exciting, though for a while I missed the moments of being alone. But I discovered that what I really missed was the feeling, and it was just as easy to achieve that padding up Sauchiehall Street late on a wintry Saturday afternoon with my headphones on as it was at the top of a hill in the middle of nowhere. The Blue Nile – like Saint Etienne later did with London – helped me to settle in to the city. I ended up associating the song with Alexandra Parade, though I’ve no idea if this was the inspiration for it. If you know it wasn’t, please don’t tell me.

Now, if all this has your contact lenses diving for the back of your eyeballs, remember I was a slightly fey, reasonably uptight person only able to properly feel things when there was a suitable song playing. I still am – I can’t help it, any more than Sinitta can help saying ‘yes’ to whatever request is made of her. Sometimes the best pop really is the stuff you only ever listen to when you’re on your own, and for me The Blue Nile will always be about that lovely moment of solitude when you find yourself held exquisitely between happiness and sadness. What a feeling. 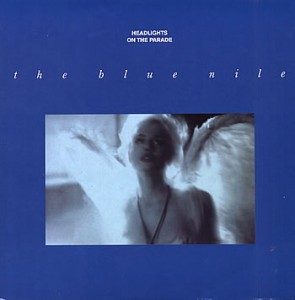 Who could sing this today and have a hit? Staying in Scotland, I’d like to hear a Prides version.