I miss how album campaigns used to be: artist comes back with big fresh new single, second single comes out to plug an upcoming album filled with lots of new songs (all at once – none of this instant gratification drip feeding), two of which at some point would be released as singles. Quite often you would have no idea what songs would come next and would spend the length of a campaign waiting and hoping that your favourite one from the album would be single three or four (or if you were fortunate, the fifth). Then the wider world could be exposed to a song you love, radio would adore it and it would get played in clubs and be fondly remembered by everybody in years to come. Alas we never quite got to that last point with Alphabeat.

After a couple of years having success in Europe, Danish band Alphabeat were finally launched onto the UK charts in 2008 with Fascination lodging itself in the top ten for a few weeks, the album hitting the top ten and the follow up singles 10,000 Nights and Boyfriend going top twenty. Somehow Fascination had passed me by slightly (inexplicable – Ed.) but after hearing the other two singles, I got myself the album This Is Alphabeat and loved what I heard. The album had been spruced up for its UK release – some tracks had been taken out and replaced with newer recordings and some had subtle changes, What Is Happening being one of the latter.

On its opening, the song doesn’t exactly scream pop masterpiece and I would forgive you for hitting skip 30 seconds in. A tale about a relationship heading for the rocks led by Anders Nielsen, it plods along for a couple of verses and choruses – but then bam! Everything turns on its head and we have a masterpiece – the drums properly kick in and so does the beat and the song picks up a fantastic pace as some well-timed and epic “Oooh’s” drop in as backing vocals. For its UK spruce-up some strings were added, contributing an extra emotional punch – combined with a repeat of the lyrics of the first verse they suddenly make all this feel rather melancholy. As the chorus comes back in, Anders’ vocals and the strings turn up the drama and the song builds to a crescendo as he holds the last note against a final bash of the drums before ending with pre-recorded applause. I loved this song and so hoped it would be the next single.

Back in wider Europe that wasn’t to be the case. Go-Go had been chosen to be the next single and I was rather miffed. However, Alphabeat’s website (back then bands were yet to use Facebook or Twitter to communicate with fans) would later state that a different song would be the next UK single and that it would indeed be my favourite, What is Happening. I was so very excited – I had endured a bit of a pop void since leaving university and now the first band that I had subsequently gotten into were releasing my favourite song off the album. As this was following three top twenty hits, a further one seemed all but guaranteed.

Despite the Christmas release schedule approaching, the signs were looking good. Remixes of What Is Happening were out in the clubs and Radio 1 had added the song to their C list (the radio edit wisely cutting out the repetition in the second verse). In fact to me it was a great choice for the festive period – its perky yet sad tones combined with the mid-song tempo change and that glorious second half made it perfect for Christmas parties. As the release date drew nearer, the video came out and the song moved up onto Radio 1’s A list.

Yet despite all this the song crashed and burned. Given the law of diminishing returns I suspected another top twenty hit might be pushing it and thought top thirty or perhaps top forty would be more likely. But What is Happening didn’t hit the top fifty, nor the top seventy five – not even the top one hundred. Somehow Alphabeat followed up a top ten and two top twenty hits with a no.110 ‘hit’. This sort of thing is quite common nowadays, when all the promotional effort is put into the first single and the album with everything after just thrown out there with little regard of making a hit – but back in 2008 it seemed so alien.

I still don’t understand why it flopped so badly –  maybe the CD single wasn’t widely stocked, or maybe people had got bored or were now just irritated by those pesky, perky Danes. Or maybe people just hit skip after that plodding first 30 seconds… 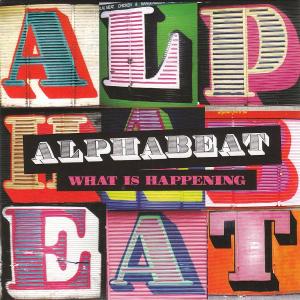 Entered chart: Did not chart (though it did make no.110)

Who could sing this today and have a hit? I can really imagine Olly Murs doing this, albeit having the tempo of the latter half throughout the entire song. Not that he’s exactly setting the charts alight these days…